INTERVIEW | Adam Wildman, an 18-year-old Queenslander, has moved to the UK to pursue his passion for the sport of Flowboarding and compete in the Flowboarding European Championships. POPPY DAMON chats to Adam to find out more about this growing sport.

by Poppy Damon
in Sport 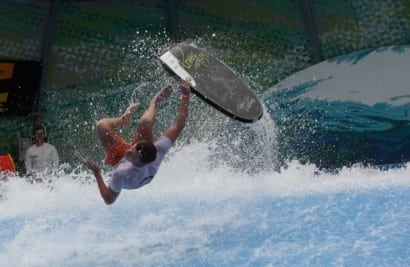 ADAM Wildman, an 18-year-old Queenslander, has made the big move to the UK to compete in the Flowboarding European Championships in August. He dropped us a line from Adlington, Lancashire, to tell us what this new sport is all about.

The sport is relatively unknown in England and goes by many names including Flowboarding and Flowriding. It’s basically an artificial or man-made wave that can either be rode with a body-board or a stand- up- board (Flowboard).

You can watch a video of me Flowboarding here:

You are marked on your skill, style, tricks and cleanliness on the wave. It is judged much like snowboarding or surfing on a point tally by 3-4 different judges.

How popular is it?

There are over 130 flowriders located in over 15 countries. In England there are various venues, located in Cornwall, Bedford, Castleford and Heworth. There are National Flowboarding events all over the world that lead up to the World Flow Championships in October every year. At this event teams from the USA, South Africa, Singapore, Europe, Dubai and South America all compete for the number one ranking in the world.

DreamWorld held the Australian Flow Championships in February 2011 with a stand up division, as well as a junior and senior bodyboarding division. I placed second in the under 20’s at this competition. Some of these competitions have attracted between 300 and 400 spectators.

Why did you move from Queensland to the UK?

My goal and dream is to build Flowboarding into a major sport like you see over in the USA or South Africa. I think with a bit of help, time and dedication we can build it up and compete against the world. I simply want to make the sport I absolutely love grow by hopefully getting some attention and advertising for the sport.

Have you competed in many competitions?

I have recently competed in Sentosa, Singapore and placed second in Pro Bodyboard – even though I was the youngest and least competed rider to take part.

How do you get started, if our readers want to give it a go?

To get started you simply need to go to any one of four Flowriders in the UK. Flowhouse Yorkshire and Bedford, Flowrider Cornwall and Flowrider Heworth.

Simply book your session and everything will be provided for you to carve with the pros!

Finally, how are you finding the UK?

I am loving the UK! Missing home a little here and there, but have met some fans and made some awesome friends as well; so it has been fantastic so far.