The opener to the Rugby League World Cup in Cardiff saw Australia get off to a slow start against a fiery and competitive England side, but the Kangaroos were determined to show why they are favourites, coming back to steal the win 28-20. 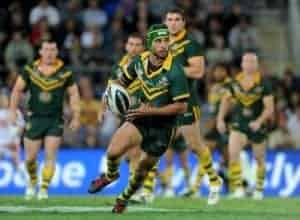 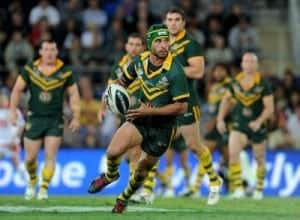 TRADITIONALLY the end of the Rugby League season is met with a sense of sadness and depression.

For seven months we’ve followed our team through thick and thin. We’ve sat in the cold wet stadiums wearing our jerseys and scarfs with pride. Witnessing the heroic wins and painful losses. Feeling every emotion possible, from jubilation to heartache. Defending our team’s honour at all costs, so much pride on the line you’d even tell your best mate to go find the nearest lake to jump if he dissed your team. And that’s not even mentioning the State of Origin. Next year Blues!

But the worst feeling of the season end is it’s a good six months before it all kicks off again, and if you don’t much like cricket, what else can you do in that time?

The consolation is a few extra weeks of footy as the seasons end is usually met with the representative games. 17 of our best don the green and gold and run out under the guise of the Kangaroos. But lets face it. With the whitewash that Australia usually dish out to teams and the lop sides score lines that come with it, you may as well think you were watching a game of cricket.

In a game where Australia has always been dominant, international Rugby League has suffered over the years.  It’s become predictable and boring and people have switched off. Yes, we all love a win, but when it’s a 60-0 try fest even the most die-hard fans get bored. But I assure you, it’s all changed and those one-sided events are just a memory of the past.

Thanks to the strength of the Burgess Brothers and the leadership and skills of Kevin Sinfield and Sam Tomkins, the English team match their class with the likes of traditional rivals New Zealand and the NRL studded Italian national team, who I believe will be the dark horse of this competition after their convincing win against Wales.

With these teams showing early signs of class, my prediction is we’ll soon be begging for the return of the whitewash glory days. And if you don’t believe me, I need just remind everyone of who’s currently holding the Rugby League world cup. Here’s a hint; it isn’t Australia.

Travelling up to Cardiff to see the Rugby League World Cup opening ceremony and the Australia vs England curtain raiser, it was clear this will to be a World Cup to remember.

After a spectacular opening ceremony with acrobatics and coloured flames, the record crowd for Rugby League world cup opening match were all in full voice, making it obvious us Aussies were clearly out numbered.

The English wasted no time in making us look amateur as they sniffed out some poor defence and raced to a 4-0 lead though a great back line play which combined stars James Roby, Kevin Sinfield, Rangi Chase and Tomkins who sent Ryan Hall crashing over in the corner.

Not making light of this lead and not wanting to let Ausatralia in, Sinfield produced some magic in the form of an infield kick, which was collected and grounded by Leroy Cudjoe in the 19th minute to give England a 10-0 lead.

The sluggish start, which was very un-Australian quickly had people questioning the Kangaroo’s choice to have no warm up matches leading into this competition, but as pride was on the line, the World Cup favourites quickly jumped into second gear with Greg Inglis providing some freakish magic to put Jonny Thurstone over. After adding the extras, Thurstone, who by his standards was having a quiet game, stepped up and combined with Captain Cam Smith to put Greg Bird over the line.

With seconds left in the half and after receiving a scrum feed after a Sam Burgess forward pass, it was some Billy Slater that saw the fullback slice open the English defence and score a solo try to end the first half 18-10.

The second half started much as the first one ended. After a 40-20 from Cam Smith which saw Australia in great attacking position, it was Dragons winger (and Legend) Brett Morris who went over in the corner to make it 22-10 and give us a two converted try lead.

After some silly back-to-back penalties in the 52nd minute, England scored again through the likes of George Burgess who stormed his way over the line and with Sinfield’s conversion successful, suddenly it was a 6-point ball game.

A penalty to Australia saw Thurstone kick us to outside a converted try and hold the score at 24-16. It was at this stage the English heads went down and Australia, capitalising on another penalty, put Darius Boyd over in the corner after some slick back lines moves.

With the game sealed up, England scored a final try when Josh Charnley scooped up a loose pass from Billy Slater and raced uninterrupted to the try line. With Sinfield unable to add the extras Australia ran out 28-20 winners in what can only be described as a close and fiery encounter by two teams who want to win this tournament.

With a great win an end to an even better night, this opening match was living proof international Rugby League is back and stronger than ever. If you get the chance I urge you to get along to a few games and cheer our boys home.