The Australian Legends rugby team caught up with their old English rivals at a reception at Australia House yesterday, ahead of their 2003 World Cup Final repeat match at Twickenham Stadium on Thursday.

by Michael McCormick
in Sport 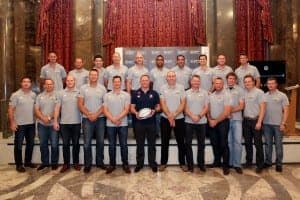 THE marble floors and crystal chandeliers hanging from the majestic domed ceiling in the press room of Australia House are a far cry from the hallowed turf of Telstra Stadium, circa 2003.

This room however, hosted a welcoming party for the Australian Legends rugby team on Tuesday ahead of their 2003 World Cup Final repeat match against England on Thursday.

As the players entered the room, they immediately made their presence felt, and not just because most of them had to duck their heads to not hit the chandeliers.

A round of applause followed by boisterous laughter and the clink of glass beer bottles filled the room as the Australians settled themselves in for the ever so familiar press conference prior to a big game.

Drink in one hand, sandwich in the other, each player looked as though they were enjoying a catch up with old mates while reminiscing on their previous tours of England and the historic Australia House.

Soon the crowd were asked to take their seats and Ken Pascoe, the Consul General, took to the microphone to officially welcome the team to London and wish them luck in the game on Thursday. 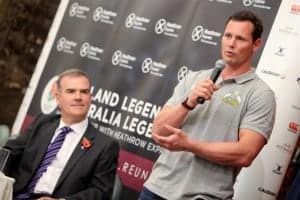 Keith Greenfield, CEO of major sponsor, Heathrow Express, then addressed the players and explained the values upheld in the sport were those the private train operating company represent as well.

“We know that our customers love rugby, and so do we. We want to give something back in whatever way we can and so sponsoring such a worthy event is a pleasure,” stated Greenfield.

Following this, former England flanker, Richard Hill and former Australian prop, Al Baxter, were questioned about the match, which they both will play.

Hill reminisced about his time in Australia during the 2003 World Cup and in particular, the lead up to the final.

“We stayed at a hotel at Manly beach and a woman parked her car outside the hotel, opened her car boot and blasted Waltzing Matilda and all sorts of other Australian tunes from there the night before the match,” he said.

“She was genuinely trying to put us off, but funnily enough, it actually relaxed us.”

The 2003 World Cup win galvanised the UK and floods of boastful rugby fans filled Trafalgar Square for a heroes welcome when the winning team arrived home. The Australians are hoping for less of a reception for the English team this time around.

“That was a painful day for [the Wallabies] but we hope to get some revenge on Thursday,” Baxter stated.

The match will take place tomorrow night in front of what is expected to be a big crowd at Twickenham Stadium. Proceeds from ticket sales will go towards funding two great charities that help injured rugby and rugby league players recuperate.

Click here to buy tickets to the Australia vs. England repeat match.