England trail by 535 runs on the first innings with nine wickets in hand after day two of the second Ashes Test against Australia in Adelaide. 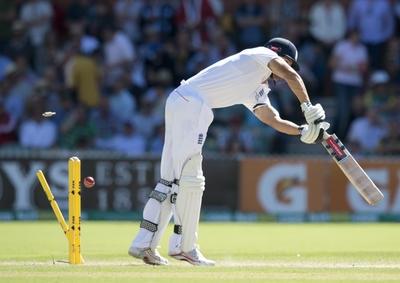 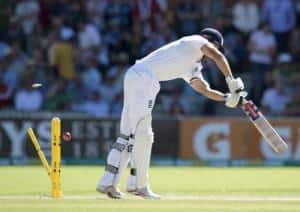 ENGLAND will hope a docile Adelaide Oval pitch proves to be their saviour with Australia making the most of their good fortune to score 9(dec)-570 on Friday.

England will resume on Saturday’s third day of play in the second Ashes Test on 1-35.

The tourists will look to Kevin Pietersen, who has scored a hundred and double-century in his two previous Adelaide Tests, to put on another batting master class.

Pietersen will need to be on song to rival the performance of Aussie skipper Michael Clarke (148) who stroked 17 boundaries off 245 balls in a classy hundred, his fourth of 2013.

Brad Haddin (118) thumped 11 fours and five sixes and shared a 200-run stand with Clarke, a record for Adelaide Tests for the sixth wicket.

Australia’s bowlers were buoyed by having such a big total to defend and Mitchell Johnson was bowling up above 150 clicks, getting pulses racing when he bowled England captain Alastair Cook for three.

England have taken possession of a new batch of chest guards and Joe Root’s received a workout in the 19th over when he wore a short ball from Johnson.

In a dramatic final over of day two, Michael Carberry was almost run out for 20 but Chris Rogers missed with his throw and then Carberry survived a lbw appeal.

Clarke chose not to call for a referral and replays showed the decision would have been overturned.

Australia had resumed on Friday morning on 5-273 with the match evenly poised.

Clarke and Haddin added 116 runs without loss in the morning session as the momentum swung Australia’s way.

Clarke’s dismissal after lunch – caught at midwicket to debutant Ben Stokes – was a shock when it finally did come.

Troubled by a sore ankle earlier this week, the 99-Test veteran racked up his 26th hundred and third in his past five Tests against England.

Dropped on 18 and 91, Clarke showed the dangers of giving Test cricket’s leading run-scorer for 2013 a couple of chances.

While Clarke has equalled Ricky Ponting’s mark of six Adelaide tons, the 36-year-old Haddin has scored his second century in five Tests at the ground.

Tailender Ryan Harris smashed 55 not out as part of Australia’s feast of runs.

Trailing one-nil in the five-match series, the demoralised England side had coughed up three catches on day one, including Haddin on five.

Clarke was dropped again on 91 on Friday while Haddin, on 51, was caught behind off Stokes but he had overstepped the crease.