Feleti Mateo is set to be at the centre of an international tug of war for his services, with England coach Steve McNamara targeting the Warriors NRL star for next year's Rugby League World Cup. 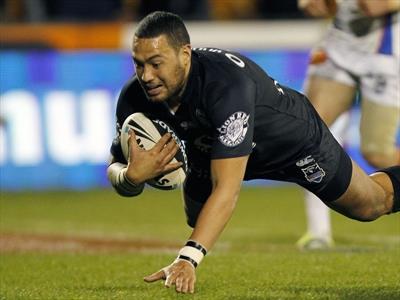 FELETI MATEO is set to be at the centre of an international tug of war for his services, with England coach Steve McNamara targeting the Warriors NRL star for next year’s Rugby League World Cup.

The Sydney-born former Parramatta utility qualifies for the Lions by virtue of his English mother.

However, he represented Tonga in the 2008 World Cup and to add another twist to the tale, would be eligible for New Zealand next year through residency, having lived in Auckland for two years.

Mateo is one of the most talented ball-playing forwards in the NRL, but has constantly been overlooked by NSW selectors.

His decision to play for Tonga currently makes him ineligible for any other nation and NSW until he makes a formal application to the Rugby League International Federation to change his allegiance.

McNamara is a big fan of the 26-year-old, who also holds a British passport which he acquired before a brief spell in Super League with London Broncos in 2005.

And McNamara has a list of 40 NRL players who could do likewise for next year’s World Cup, with Mateo topping the list.

However, McNamara said he’d want Mateo to show his commitment to play for the right reasons before he’d consider him for selection.

“Feleti is a class player, but it wouldn’t be right for me to chase him to play for us,” McNamara told AAP.

“It was Chris who contacted me about playing and we met up and he convinced me he wanted to play for us for the right reasons. But I’d love to hear from Feleti.”

Mateo’s manager David Riolo said he would discuss his client’s options this week when he sees him at the Warriors’ camp in Kiama, NSW, where they’re staying ahead of Saturday’s clash with Canberra.

“He’s in a bizarre situation where he’ll qualify for four countries, but until I speak to him, I have no idea what he’ll do,” Riolo told AAP.

McNamara is midway through a three-week trip to Australia catching up with his English stars to outline to them his plans for the World Cup, which takes place in England and Wales from October 2013.

This Wednesday he’ll will meet with Gareth Ellis, Sam Burgess, James Graham and Chris Heighington in Sydney where he’ll reveal plans for a week-long high altitude training camp in South Africa in October.

McNamara will head to Melbourne next week to sit down with Storm five-eighth Gareth Widdop and do likewise with Brisbane centre Jack Reed on Friday before the Broncos’ clash with Wests Tigers at Allianz Stadium.

“We’ll leave no stone unturned ahead of the World Cup, and it’s vital to start planning things now,” he said.

“We’ll be the best prepared team next year and that will give us the best opportunity to win the World Cup for the first time.”