Ed Cowan is knocking on the Australian Test cricket door

Ed Cowan's fourth century of the season has launched the 29-year-old within striking distance of a Test debut against India. 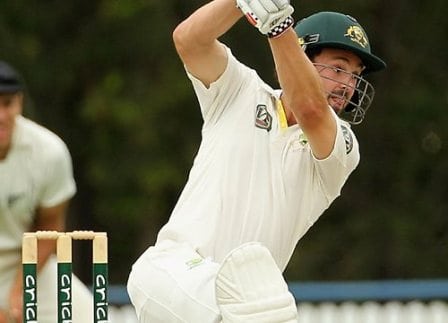 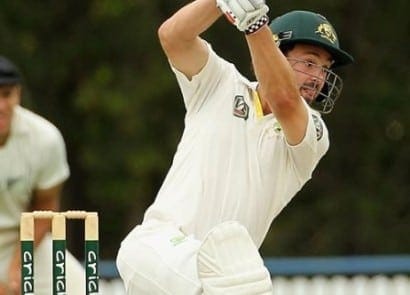 ED COWAN’S fourth century of the season has launched the 29-year-old within striking distance of a Test debut against India.

The Tasmania opener hit 109 for the Cricket Australia Chairman’s XI on Tuesday on day two of their three-day game against the tourists in Canberra.

With Australia’s selection panel due to name a squad on Wednesday for the first Test starting on Boxing Day, Cowan’s name is the one on everyone’s lips.

But with star allrounder Shane Watson set to return to the side from a hamstring injury, in place of the out-of-form opener Phil Hughes, Cowan’s ability to push his way into the side is weakened.

That’s unless selectors opt to bite the bullet and move Watson to No.6 because of his workload with bat and ball and dump Usman Khawaja, Ricky Ponting or Mike Hussey.

Australia coach and selector Mickey Arthur said on Tuesday he didn’t have an answer on Watson’s fitness to bowl in the Melbourne Test.

But clearly Watson is good enough to bat in the top six, whether he’s fit to bowl or not.

Arthur spoke in support of struggling veterans Ponting and Hussey, saying they were the type of characters he wanted in the side to foster the development of the younger players.

That leaves 25-year-old Khawaja facing a nervous wait after averaging under 30 in his first six Tests.

Another factor in selection is Arthur’s preference for having a batsman in the top six who bowls.

If Watson plays as a batsman only in Melbourne, allrounder Dan Christian is a possible inclusion after Arthur described him as arguably being among the top six batsmen in the country.

Arthur says playing back-to-back Tests in Melbourne (December 26-30) and Sydney (January 3-7) will be tough on a four-man bowling attack without an allrounder.

“I see the spinner (Nathan Lyon) bowling a huge amount more and we need to be able to fiddle some overs from our batters,” Arthur said.

“Stats will tell you that he could possibly be in our top six batters,” Arthur said.

“If you can get some overs out of your best six batsmen, then that’s a bonus.”

While Christian has his supporters, including national selector Rod Marsh, his Shield tally of 10 wickets at 49.70 this season is modest.

Arthur said he was happy for Christian to play for Brisbane Heat in Tuesday night’s Big Bash League game at the Gabba before joining a batting camp at the MCG on Wednesday.

Marsh is battling a back injury. Arthur said if Watson and Marsh were named in Wednesday’s Test squad they would be given every opportunity to prove their fitness.

Leading pace bowler Ryan Harris is also under a fitness cloud and was due to play for Heat on Tuesday night.

Mitchell Starc’s spot would be under threat if Harris returned to the side.

With only domestic Twenty20 cricket scheduled in the lead-up to the first Test, Harris has basically no opportunity to prove his fitness for a five-day Test match. – AAP

Do you think Ricky Ponting should make the Australian Boxing Day Test team? Comment below: