ALL this excitement around London lately can only mean one thing: it’s AFL London finals time. 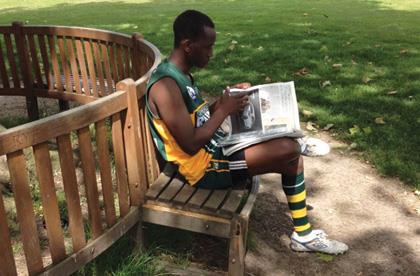 ALL this excitement around London lately can only mean one thing: it’s AFL London finals time.

Two days of semi-finals action will take place on Saturday and Sunday at Bounds Green, however there is still some confusion about who will play whom and when.

At this stage, Wandsworth is set to take on Putney in the Premiership division in the second semi-final on Saturday in a shot for the Grand Final.

Putney, 109-point winners over the Swans on the weekend, must go in favourites in that game over the Demons, who were rolled by the Lions on Saturday in an upset.

Putney has never won a Premiership cup nor a Conference prize but is well placed to take out some AFL London silverware this year.

There has been some talk at league headquarters that the Conference match will be a third v fourth knockout affair, which would see the Magpies and Demons do battle and make it a Wandsworth v Putney day in the ones and twos.

However that fixture would cause severe rumblings among some clubs, who have told their players that Saturday would be 1 v 2 across all grades and Sunday 3 v 4.

“If they want to run it to convenience the clubs then we’ll fight it tooth and nail,” Shepherd’s Bush Raiders (West London Conference team) coach Craig Marshall said.

“In the past they’ve run it so first and second play on Saturday and we’ve had guys who have changed shifts who are working at the Olympics, so it’s not on.”

The Demons were beaten by North London in a fiery contest at Bounds Green — with a report and two sendoffs the result of a brawl in the second term — however still finish as minor premiers in the premiership division.

Andrew Slevison booted 10 majors to give him 20 in a fortnight, while Adelaide boy Luke Jackson snagged eight from centre half-forward in a best-on-ground performance.

Unfortunately for the Magpies, they’ll need to reach the Grand Final before Slevison re-joins them, as the dominant forward packs his bags for overseas adventures for a few weeks.

North London Lions will meet West London in the knockout semi final on Sunday at the Lions’ home in what looms as a thrilling encounter.

The Lions beat the Demons on Saturday, while the Cats only accounted for bottom placed Wimbledon by 10 points.

The word is that Wimbledon acquitted themselves very well at Mostspur Park with Nick Katsivelos and Mark Williams, Hawks’ stalwarts, battling it out to the death.

The Lions, the league’s sleeping giants, must certainly be licking their lips heading into this sudden death encounter with last year’s premiers who are just holding in at the pointy end of the season.

In the conference division, the Raiders finished minor premiers with a win over the Giants at the weekend. They recruited an African player before the game to help make up the numbers, although they did have to pull him away from a London newspaper, which seemed to have more appeal than our native game.

The Raiders meet Regents Park Lions this weekend for a chance at the Grand Final, while Clapham meet the Magpies in the knockout final.