David Warner proved the difference with a remarkable 163 as Australia held on for a tense 15-run win in the tri-series one-day finals opener against Sri Lanka at a wet Gabba. 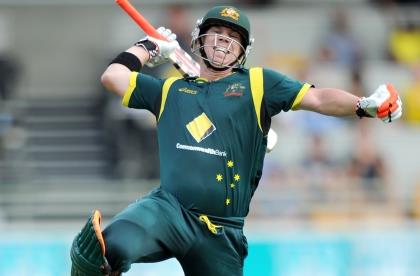 DAVID WARNER proved the difference with a remarkable 163 as Australia held on for a tense 15-run win in the tri-series one-day finals opener against Sri Lanka at a wet Gabba.

After watching Warner stroke the third highest ODI score in Australia and guide the hosts to 6-321, Nuwan Kulasekara provided his own fireworks.

There were plenty of anxious moments as Sri Lanka somehow remained in sight of their daunting target while also on track on Duckworth-Lewis comparison with light rain starting to fall in the final overs.

However, the visitors finally succumbed for 306 with four balls remaining.

Remarkably Warner was considered a chance to be dropped on Sunday in a team reshuffle catering for Clarke’s return from injury.

Warner would have been nervous after a modest series return of 195 at 24.37 ahead of the finals opener.

Indeed the NSW left-hander had never really shone on the ODI stage, averaging just 22.5 in 18 games with three 50s before the Gabba clash.

However, Peter Forrest – the only other Australian batsman to hit a ton this series – was the odd man out when the XI was confirmed.

But Forrest took the field during the Sri Lankan innings so Warner could rest a groin complaint after becoming the seventh Australian to break through the 150-run barrier in ODIs.

Warner’s 157-ball, three-and-a half hour effort finally ended on the last ball of the innings when he was bowled by Dhammika Prasad (2-51) trying to add to his 13 fours and two sixes.

Warner did not match his third Test fireworks in Perth against India where he reached triple figures in 69 balls – the equal fourth fastest century ever.

Indeed Warner was more busy than brutal as he notched his century in 111 balls before celebrating with a running leap and air punch.

Unfortunately only 12,196 people witnessed it.

Matthew Wade (64) put on a 136-run opening stand with Warner before being spectacularly caught by Rangana Herath on the long-on boundary.

Two brief rain delays disrupted Australia’s innings but it was wickets that were falling early during Sri Lanka’s dig.

Veteran quick Brett Lee (3-59) celebrated his return to the side at the expense of Clint McKay by cutting through the top order including the prize scalp of Kumar Sangakkara for 42.

He was ably supported by the part-time spin of David Hussey (4-43) as the pair reduced Sri Lanka to a seemingly hopeless 6-144.

Given lives on 24 and 58, he belted seven fours and three sixes – including back-to-back maximums off Hussey – to give Australia a real fright.

Dhammika Prasad (31 not out) maintained the rage before Shane Watson (3-33) finally extinguished the innings in the 50th over.

The second final in the best of three series will be held on Tuesday in Adelaide, which will also host the third game on Thursday if needed.

IMAGE: Australian batsman David Warner reacts after scoring a century during the 1st One Day International cricket final between Australia and Sri Lanka at the Gabba in Brisbane, Sunday, March 4, 2012. (AAP Image/Dave Hunt)