Michael Clarke is backing himself and his team to go to another level this year following the retirement of Ricky Ponting and now Mr Cricket, Mike Hussey.

by Ben Horne
in Sport 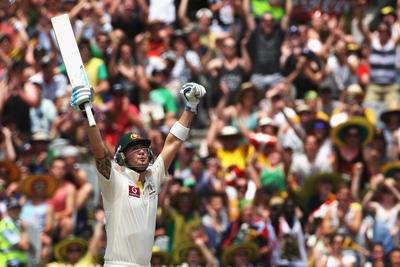 AUSTRALIAN captain Michael Clarke says the retirement of Mike Hussey has made him even hungrier for success.

Clarke has shown through his batting performances over the past 18 months that captaincy brings out the best in him.

But the generational change this summer that has seen Ricky Ponting exit the scene and Hussey about to follow will heap an unprecedented amount of pressure on Clarke’s shoulders.

Rather than be daunted by the extra burden in leadership, Clarke is backing himself to go to another level.

It’s fair to say Clarke might have set the bar a little too high at the SCG last year.

He is attempting to follow on from his stunning last-start 329 not out in Sydney.

“What are you saying, don’t play this Test?” smirked Clarke ahead of the third Test against Sri Lanka.

“My goals haven’t changed. My hunger for success has probably only increased since hearing that Michael Hussey is going to retire.

“I know I have a huge responsibility as one of the leaders in this team to make sure I’m performing and leading from the front.”

Clarke has spoken to his players about what’s required to ensure the next generation don’t crash and burn in the Ashes without Hussey and Ponting.

“I’ve asked the players to work on their leadership, to feel like they are captain or vice-captain of the team. I’ve said my whole career that you don’t need a ‘C’ or a ‘VC’ beside your name to lead,” he said.

“I think over the next 12 months, you’ll see these young players stand up because they’re ready for it.”

Usman Khawaja is on standby for Clarke who has an ongoing hamstring problem, however only a late mishap would stop the skipper playing.

Clarke says he’s in better shape than he was heading into the second Test in Melbourne – where he went on to make a century.

The 31-year-old says he’s spent some time this week reminiscing about his triple century 12 months ago, which began a year when he scored more Test runs than any Australian in a calendar year (1595 at 106).

“That was a very special day,” he said.

“Walking out onto the ground (this week), it brought back some great memories.”

IMAGE: Michael Clarke of Australia celebrates his century in the second Test, Australia v Sri Lanka at the MCG. The third and final Test of the series commences at the SCG on Thursday. (AAP Image/Hamish Blair)