They hit him, sledged him and bounced him. But ultimately, all they could do was applaud him. 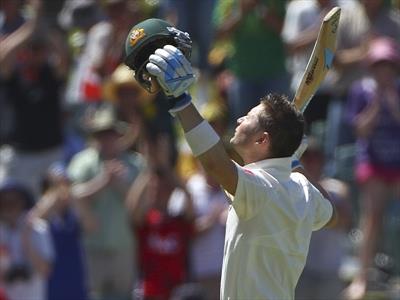 THEY hit him, sledged him and bounced him. But ultimately, all they could do was applaud him.

Clarke became the only batsman in Test history to pass 200 four times in a calendar year with a stellar 224 not out against the Proteas on Thursday’s opening day of the second Test in Adelaide.

He arrived at the crease with Australia wobbling, having lost three wickets in 15 balls.

But, with David Warner (119) and later Mike Hussey (103), Clarke delivered audacious counter-punches which floored the best Test team in the world.

His leadership tenure has featured a triple-century, three double-centuries, and three plain-old tons.

Only five Australians have made more Test runs in a calendar year than Clarke – and he has a maximum seven Test innings to come.

If Clarke’s rich form vein continues, he could surpass Ricky Ponting’s Australian record for most runs in a calendar year – Ponting made 1544 in 2005.

And given his penchant for turning centuries into doubles and triples, even the world record of Pakistani Mohammad Yousuf (1788 runs in 2006) is threatened.

In Adelaide on Thursday, Clarke was sconned on the helmet by Proteas’ paceman Dayle Steyn early in his knock.

The South Africans made good their pre-match promise to pepper the Aussie skipper with short balls.

Steyn aimed a few choice words at Clarke, but the Australian let his bat reply.

He has 21 Test tons and averages more than 50 – the mark considered to confirm greatness. – AAP