AFL London Round 3: The feature match saw the Cats blow the Hawks away by 124 points down at Peckham Rye Reserve.

There’s no surprise that the West London Wildcats are on the top of the ladder after the first three rounds of the 2015 AFL London Season. After a thrashing of the Putney Magpies by 126 points last week, Round 3 had the Wildcats heaping misery on the uncompetitive Wimbledon Hawks down at Peckham Rye Reserve.

The Wildcats took advantage of turnovers and profited from substandard defending, finding loose men at every entry into the forward fifty.

Key forward, Evan Duryea, kicked 7 goals and half back, Lloyd Williams, didn’t let anything past his mark.

Duryea kicked the first goal of the match, a quick kick off the first bounce of the game, setting a fast pace and a taste of what was to come. A 25 point lead and no signs of slowing down, the Wildcats had the sun in the second quarter.

The Hawks picked up the defence and kept the Wildcats to only 3 goals in the second, with Hawk, Troy Swann, kicking their first goal just before the major break.

With a 40 point lead the Wildcats kicked off the second half with a goal and great grab in the goal square from Clint Johnson and booming goal from James Gottschalk outside the 50.

Tempers were flaring and a heated scuffle saw both ruckmen sent off with warnings and a rare headcount was conducted. The stoppage allowed Jordan Hallam to kick the Hawk’s second.

The Wildcats nearly doubled their score in the third term, kicking 6 goals 4, blowing the lead out to 74 points at the last change.

With the fourth donning another 8 goals from the Wildcats, relief was seen when the final siren blew with the final margin at 124 points to the reigning premiers. 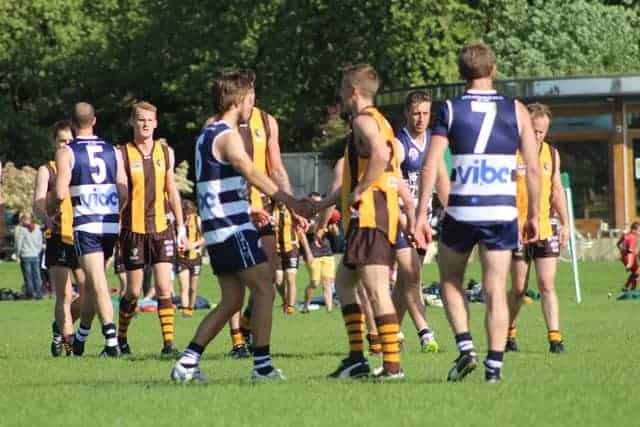