Can Lions cash in and win the AFL London flag? 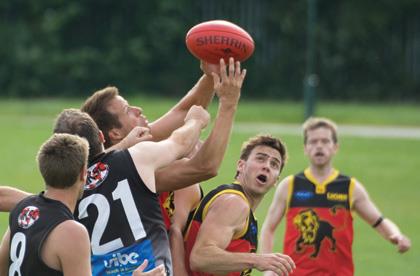 By Lee Crossley
NORTH London Lions have managed to do what all other AFL London sides could not — send two teams into the big one – the Grand Final at Motspur Park this Saturday.

The Lions’ eight-point win over Putney in Saturday’s preliminary final was, remarkably, their sixth-straight win in what has been a superb last two months for the club.

They have earned their place at the big dance but must overcome minor premier Wandsworth in order to claim their first piece of silverware since their back-to-back flags in 2001-2002. 2001 was also the last time both the first and second grade played in the Grand Final.

Lions’ president Chris Rea said the success was the result of good numbers around the club, focus and enthusiasm.

“We got belted in all three grades by West London in Round 1 and we weren’t sure how we’d go this year,” he said.

“We turned over a lot of players and it took a while to get going and then it all started to click into place. We had good numbers around the club and when we made the finals, there was a lot of desire not to trip up like we have in previous years.”

Regents Park Lions, North’s Conference side, responded to last week’s touch up by the Raiders to defeat Clapham by 29 points in the preliminary final.

If they want to reverse the result from a fortnight ago — when the Raiders reined by 26 points — and stop the Raiders’ back-to-back quest, they’ll need to kick straighter, the Lions booting fourteen behinds (most of which were gettable set shots) to almost let the Clapham side off the hook.

The Hawks now meet Reading in the first Grand Final on Saturday at Motspur Park at 11am, with the Conference game — Raiders v Lions — scheduled to kick off at 1pm and the main event, the Demons v Lions Premiership match will start at 3pm.

Premiership preliminary final: Lions 9.13 (67) def Magpies 8.11 (59).
This was one of the season’s tensest, most physical and tightly-contested matches, rightly living up to everything a preliminary final should be.

Putney, missing three members of the spine that propelled them into the finals — centre half-back Lachie O’Toole, centre half-forward Pete McGettigan and full forward Andrew Slevison — were gallant and milked every ounce of potential out of the squad that took the field on Saturday.

They even led by eight points at three quarter-time and appeared to have the momentum after booting five goals in the middle two quarters to the Lions’ three.

“We’re playing poor footy and they’re only up by a goal,” came the call from the Lions’ huddle at the last change.

True enough but also true is the Lions probably were not paying their opposition enough respect.

With so much to play for in the last, the Lions weren’t about to let a shot at the Grand Final slip in front of a wing full of home support.

The lift came from the engine room: Luke Stevenson, Benny Poole and Quentin Keeble, who was moved from attack into the guts. Levi Fernandez had some telling footy across halfback, where Dean Ipaviz Ryan Gow continued to control things, while up front coach Adam Littlechild’s hands didn’t let him down and skipper Courtney Shergold battled hard.

Special mention must also go to Brian Chisholm, who was probably the best rest-of-world player on the field. Both ruckmen Jacob Bailey, for Putney, and Mark Hawkins, for North, were among the best players for their respective teams.
While Hawkins took the honours at stoppages, Bailey was probably more influential around the ground.

The Lions had too much left in the tank at the end of the day, booting three goals to one in the final term up hill to win by eight points.

While the Magpies exited in straight sets, they can be proud of their season and how they finished, given the cattle they had to choose from.

Our attention now turns to the main event this Saturday where the big question is can North London cash in on their remarkable run of form and good fortune (lack of injuries and plenty of players available) or will Wandsworth do what they couldn’t last year and take the silverware they believe they’re entitled to back to the Alex in Clapham on Saturday night?

Conference preliminary final: Regent’s Park 5.14 (44) def Clapham 3.4 (22)
Fourteen behinds pretty much sums up the day for an inaccurate, but dominant, Regent’s Park side that was too good for Clapham in Saturday’s ALF London curtain raiser.

The Demons came hard uphill in the final stanza but it was too little, too late as the home side prevailed.

Club president Chris Rea dictated terms out of defence all day, with Chris Brennan through the spine, marking strongly.

Peter Doyle toiled hard in the middle for the Demons and may get another chance to show his wares in the Premiership match this weekend.

Social preliminary final: Balham Hawks 11.1 (61) to Ealing Emus 5.8 (38)
In a fiercely fought contest, where less than a goal separated the sides at each break, the Hawks prevailed with five goals to none in the final term.

It’s a remarkable feat that the Hawks have progressed to the Grand Final after advancing from the elimination final a fortnight ago, to the preliminary and now to the big one.

There, they’ll get a chance to give Wimbledon something to cheer about in what has been a fruitless year in the higher grades — all in front of home fans at Motspur Park.

Standing in their way will be Reading, who have made their first AFL London Grand Final since joining the league five years ago.