At London 2012, Australia’s Olympic beach volleyball hopes are carried on the proud shoulders of teammates Natalie Cook and her partner from Beijing 2008, Tamsin Hinchley, as well as newcomer Becharra Palmer and her partner Louise Bawden.

by James Drummond
in Sport 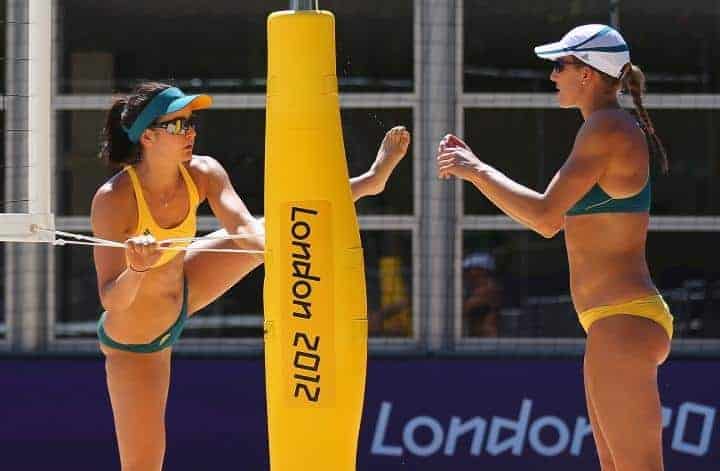 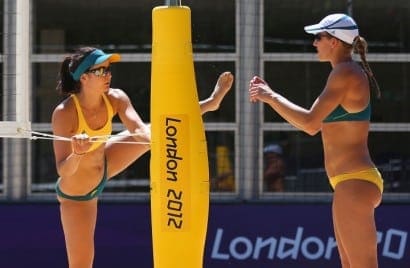 AUSTRALIA is famous for its Olympic ‘golden girls’ but this is even more evident in beach volleyball. This year, in London 2012, Australia’s Olympic beach volleyball hopes are carried on the proud shoulders of teammates Natalie Cook and her partner from Beijing 2008, Tamsin Hinchley, as well as newcomer Becharra Palmer and her partner Louise Bawden.

Cook – and the sport of beach volleyball – debuted at the Olympics in Atlanta in 1996, when she was just 21, and as Cook reminded us recently, she was at that time the youngest Olympic competitor in beach volleyball. Now at 37, she is the oldest — and ‘just as excited’ about her fifth Olympic games, having also competed in Sydney, Athens, Beijing and now London.

Her volleyball partner Tamsin Hinchley says that playing at Beijing in 2008 was ‘fun and worth every bead of sweat it took to get there’. Born in Ballarat, Victoria, Hinchley was a rower before taking up volleyball, and faced her first Olympic competition in Sydney 2000.

Melbourne’s Louise Bawden is partnering Olympic newbie Becharra Palmer in London. While this is her first Olympic Games, Palmer is a former junior world champion, and she and Bawden won the 2010 and 2011 Australian Championships. All four athletes have their eyes on the gold for Australia in London in 2012, but how do they hope to make their Olympic dream come true?

Bawden has stated that she and Palmer are ‘very results focused’ and Palmer agrees that the pair are in London to ‘aim for a medal’. When beach volleyball starts on the first day of competition, the team are primed and pumped for medal success.

In her online Olympic diary, Hinchley has stated that she feels ‘we are definitely on the right track’. She notes a lack of stress in the team, and that there’s a lot of energy in the Olympics Village in London, ‘that you don’t get anywhere else’. Her partner Natalie Cook is no stranger to Olympic gold — she captured the hearts of the home crowd in Sydney 2000 when she won gold at Bondi Beach. While beach volleyball may just mean bikinis and tanned fit bodies to many spectators, to the players it is an Olympic game to be won.

The team will certainly be competing in one the most spectacular venues yet. The most memorable of course was Bondi Beach in Sydney 2000, but, as Natalie Cook said, the teams also played ‘in a car park in the middle of nowhere’ in Atlanta. But in London the 15,000 capacity stadium on Horse Guards Parade is a magnificent testament to the popularity of the sport — which even has a fan among the royals in Prince Harry, according to London’s Daily Mail.

Cook’s former Olympic volleyball partner Kerri Pottharst, who will be commentating the beach volleyball in London for the Fox News Network, earlier called for the five times Olympian to be the first woman flag bearer for the Australian Olympic team in 20 years. As Pottharst said, Cook has the right, after a spectacular Olympic career. But even better, for Australia sports, will be to see these golden girls bringing home the gold.