World Cup 2014 | In just a few hours Australia's Socceroos will take on the Netherlands. Here's why we should dream ... but be ready for a fall. 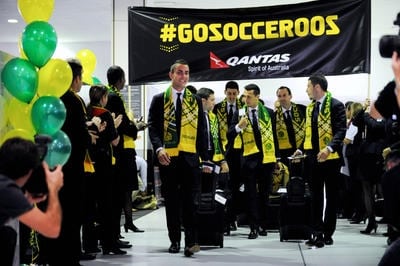 5 REASONS FOR HOPE WHEN THE SOCCEROOS PLAY THE NETHERLANDS IN THE FOOTBALL WORLD CUP:

1. Head to head. Australia have an unbeaten record against the Dutch, with a win and two draws in their three previous encounters.

2. Settled nerves. Seven players in the Socceroos starting line-up were making their World Cup debut against Chile when a shaky start saw them go down 2-0 inside the first 15 minutes. They should be more composed from the opening whistle this time.

3. Formation. The Dutch played a highly-attacking 3-4-3 formation against Spain to great effect. But they’re likely to revert to their usual 4-3-3 set up which doesn’t allow for as much attacking firepower.

4. Dutch influence. The Socceroos are well versed in the Dutch way with current FFA technical director Han Berger and previous coaches Guus Hiddink and Pim Verbeek all hailing from Holland.

5. Can they go Double Dutch? After smashing Spain 5-1, the Dutch are under enormous pressure of expectation as potential title contenders and some letdown would not surprise. Likely to be more conservative as they attempt to clinch passage to the next round.

5 REASONS TO BE VERY AFRAID:

1. Arjen Robben. The Bayern Munich star officially became the fastest footballer in the world, clocking an impressive 37 km/h as he tore through Spain to score a brace in the 5-1 first-up victory.

2. Robin van Persie. His diving header against Spain illustrated the kind of freakish goal-scoring feats he’s capable of. The Manchester United striker is in blistering form, also scoring a brace against the Spaniards.

3. Injury blows. After losing right-back Ivan Franjic the Socceroos starting line-up has suffered another blow with key midfielder Mark Milligan out with a hamstring injury.

4. Flying Dutchmen. They will be sky-high on confidence after dismantling reigning world champions Spain.

5. Yellow cards. Both Tim Cahill and skipper Mile Jedinak, arguably Australia’s two most important players, head into the match with yellow cards. They’ll miss the Spain clash if they cop a second and need to exercise some caution making crucial tackles.

Also see: Where and when to watch the Socceroos’ World Cup matches if you are in London