Lleyton Hewitt and Roger Federer are set to renew their famous Davis Cup rivalry after Australia drew Switzerland in a World Group playoff in September. 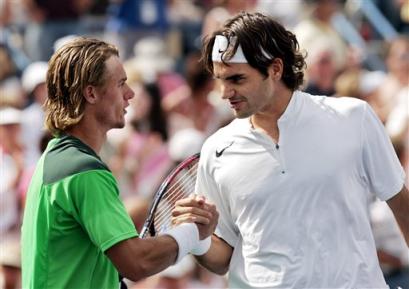 LLEYTON HEWITT and Roger Federer are set to renew their famous Davis Cup rivalry after Australia drew Switzerland in a World Group playoff in September.

Australia will host the playoff which could potentially take place at Melbourne’s Rod Laver Arena, the venue of Hewitt’s miracle comeback victory over Federer in the World Group semi-finals in 2003.

Hewitt’s incredible recovery from two sets to love and 5-2 down marked his last success over Federer for seven years during which the Swiss master embarked on 15-match winning streak over Australia’s former world No.1.

Hewitt eventually scored a hoodoo-busting triumph over the 16-times grand slam champion in Halle last year, but a Davis Cup rematch at Melbourne Park between the career rivals, friends and now family men would be one to saviour.

Still committed to the Cup cause, Hewitt and Federer each notched singles and doubles wins for Australia and Switzerland in playoff victories over China and Portugal respectively earlier this month.

Australia, under the leadership of first-year captain Pat Rafter, are bidding to rejoin the elite 16-nation World Group for the first time since 2007.

Rafter welcomed the Swiss challenge after Thursday’s draw in London.

“Switzerland will obviously be a tough opponent but certainly not unbeatable,” Rafter said.

“I will chat with Tony and our opinions in terms of surface etc, but I am excited by the challenge and I know the team will be too.”

Switzerland also boast world No.16 Stanislas Wawrinka, who, like Federer, was unbeaten in the 5-0 playoff whitewash of Portugal in Bern.

Since losing to Belgium in the first round in 2007, Australia – 28-times Cup champions – have lost World Group playoffs to a Novak Djokovic-led Serbia in Belgrade, Chile away in 2008 and to Belgium in Cairns last year when Hewitt had to withdrew from the reverse singles with a wrist injury.

Australia also boycotted a playoff in India in 2009 due to security concerns.

This year’s playoffs will take place from September 16-18, the same weekend as the World Group semi-finals.

In the other playoffs, Romania will host the Czech Republic, Russia will entertain Brazil, Canada go to Israel, South Africa are home to Croatia, Chile host Italy, India travel to Japan and Austria visit Belgium.