The Aussie cricket team have been humiliated by India, losing the second Test before lunch on the fourth day. 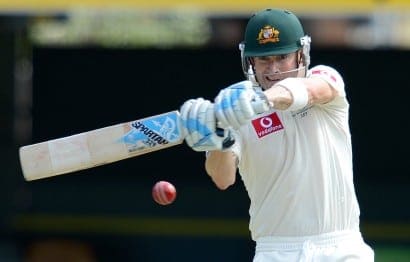 AUSTRALIA has been left licking its wounds after being handed a crushing defeat by the Indians in the second cricket Test in Hyderabad, India.

The Aussies were humiliated by the home side, producing one of their worst performances in recent history to go down by an innings and 135 runs with five sessions still to play.

The tourists resumed their second innings on day four at 2 for 74 chasing down a further 192 runs just to make their hosts bat again. Clarke’s men proved clueless though to bamboozling Indian spin attack, all eight remaining wickets falling in time for lunch for a paltry 56. Australia finished with an innings total of 131, still 135 short of their opponent’s daunting first innings score.

Apart from Cowan’s 44, no one else was able to get past the 30 mark. Pattinson, Henriques and Hughes all scored ducks; with the latter of the three surely now concerned (again) for his Test cricket future.

Ravichandran Ashwin was the best of the Indian Bowlers, taking 5 wickets off his 28 overs.

Aussie skipper Michael Clarke said it was “unacceptable” to have not capitalised on winning the toss and having the first chance to bat on the wicket.

Australia once again were let down by their batting, with the top four batsmen only putting on 57 runs before Clarke came in and steadied the ship in the first innings.

The captain was once again the star for Australia with the bat on day one, high scoring with 91. Matthew Wade supported him with a hard earned 62, before the tourists crumbled and Clarke decided to declare at 9 for 237.

India’s top order had none of the problems experienced by the Aussies, with Cheteshwar Pujara scoring 204 and Murali Vijay scoring 167 in the hosts’ first innings of 503 to set up the comprehensive victory.

Glenn Maxwell on his test debut did most of the damage for the Australian bowlers, picking up four wickets but taking almost two days to do so.

Clarke praised the performance of India admitting they had once again been outplayed by the hosts. He laid the blame of the Australians poor showing with the batsmen.

“Our batters must take a lot of the responsibility. We haven’t scored enough in the first innings in both Test matches, that’s unacceptable,” he said after the match.

Clarke has indicated he may now move himself up the order in the hope he can help the team make more runs in the third Test.

The Indian Skipper MS Dhoni was elated with the win and praised the efforts of Pujara and Vijay who put on 370 runs between them.

The Australians now have nine days to re-group and do some soul searching before the next match in Mohali begins on 14 March. India now lead the four Test series 2-0.