Australia down the Poms in the basketball 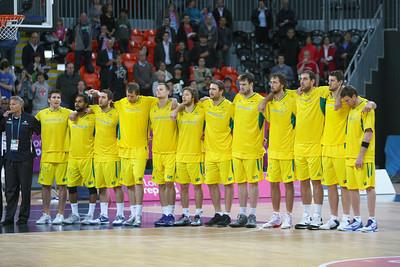 For the Boomers, Brad Newley was impressive, finishing with 23 points, while Joe Ingles backed-up his dominant performance against Serbia to drop 16 points and fill-in point guard Adam Gibson scored 13.

With the game against Great Britain in the balance, coach Brett Brown said his team simply found a way to win, something he’s pleased about as the Boomers move towards their qualifying series for London 2012 against New Zealand next month.

“I think we have been getting progressively better,” said Brown. “I think tonight’s win probably just shows that we were able to find a way to get a win.

“We sat out our two point guards. Like everybody else at this stage of the tournament, they’re a little bit beaten up and a little bit tired, so we ended up sitting Patty Mills and Matty Dellavedova. Adam Gibson came in and I thought he did a great job. Joe Ingles had two good games in a row, and as a group we needed everybody.”

The Boomers now travel to Spain for two games against the Spanish national team who are ranked No.2 in the world behind the USA, and boast NBA superstars Pau Gasol, Marc Gasol, Rudy Fernandez, Juan Carlos Navarro and Jose Calderon as well as rising star guard Ricky Rubio.

“They will be the best team that we play,” said Brown.

“They are an annual world force lately, they’re arguably among the two best teams along with the United States, and to play against that team in Spain, against a hostile crowd and that type of talent is just invaluable.

“We’ll go in there with some confidence and feeling good that we’re going in the right direction.

“There’s no time to feel too good about ourselves. We only have two weeks left (until the Oceania Championship) andwe can’t give an inch. We have to take advantage of every day.

“We know we’re playing against a well-coached and veteran type team in New Zealand.”

The Aussies struck first in OT, with Gibson scoring inside off a Mark Worthington assist, but Great Britain rallied and edged out to a six-point lead thanks to the sharp shooting of Freeland.

The Boomers came again, and when Newley found Matt Nielsen for two, before connecting from long range himself, the Aussies were back within one point.

Gibson was fouled and sent to the line, making one of two to tie things up as Great Britain, who were struggling to score, had 10 seconds left to try and steal the win.

But it was captain Nielsen, who did the stealing, snatching the ball and finding Gibson who was again fouled and sent to the charity stripe.

He made one of two again to put the Aussies noses just in front.