Australia do battle with Pietersen at WACA

Australia need another seven wickets in the Third test in Perth to claim an Ashes victory, with England 3-95 chasing a target of 504. 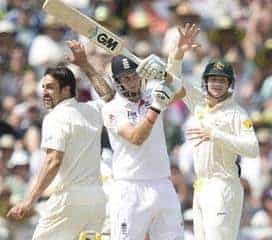 KEVIN Pietersen is locked in a tense battle with Australia’s bowlers as England struggle to avoid a series defeat on Monday’s fourth day of play in the third Ashes Test.

Set 504 to win, England have reached 3-95 at tea, with four sessions of play remaining.

Star No.4 batsman Pietersen is unbeaten on 24 with Ian Bell on six.

England had reached 1-24 at lunch.

Michael Carberry (31) got a start for the second time in the match before he was out lbw to Shane Watson.

Wicketkeeper Brad Haddin took a diving catch to remove Joe Root off Mitchell Johnson’s bowling at 3-76. Root called for a review which showed it wasn’t a bump ball and the batsman had to go.

Pietersen, who boasts 23 Test hundreds but hasn’t passed 53 in this series so far, has faced 39 deliveries and hit three fours.

Resuming on Monday on 3-235, Australia added 134 runs in 17 overs at almost eight runs per over. England’s bowling and fielding sank below Test level against Australia’s onslaught, leaving the tourists’ batsmen with a huge task to save the game.

Watson crunched 11 fours and five sixes, moving from a half-century to a triple figures in 28 balls.

Australia lead the five-match series two-nil and are perfectly placed in hot conditions to wrap up the series before the Boxing Day Test.

South Africa scored 4-414 in 2008 in Perth in the second-highest successful fourth-innings run chase in Test history. However that WACA pitch was a docile surface in comparison to the cracked strip in use for the third Ashes Test.