Australia can fight back in Ashes: Clarke

Michael Clarke is adamant Australia can lift their shattered emotions in time for a must-win second Ashes Test at Lord's starting on Thursday. 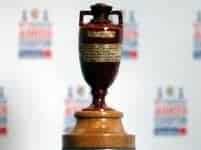 DESPITE the second Ashes Test, being played at Lord’s, starting in just four days, Clarke says his young team can continue to show courage, bounce back and win the series.

“I don’t think it will be that difficult, to be honest,” said Clarke, who refused to blame umpiring decisions for the loss.

“We feel we were so close to winning this Test, but I can guarantee they’ll be counting down the next four days to start the second Test.

“The guys are full of energy and we want to have success on this tour.

“We will play our best cricket and earn the respect of the people who don’t respect us.”

“No, I don’t think so. It’s been a great Test match, a very even Test match. I don’t think I’ve played in one in which the momentum has changed so quickly, so often,” he said.

“Clearly they are going to be disappointed like we would have been but it’s all set up nicely now for Lord’s.”

In one of the most dramatic and controversial Ashes matches in history, it came as little surprise that it was the decision review system (DRS) that eventually inflicted the most heartbreaking of defeats on Australia.

England secured a pulsating 14-point victory shortly after lunch on the final day, when man-of-the-match James Anderson had Brad Haddin caught behind, the feathered nick only barely showing up on HotSpot.

It was the correct call.

But Haddin being given out for the slightest of nicks – when England’s Stuart Broad managed to survive smashing a ball to first slip earlier in the match – made defeat a bitter pill for Australia to swallow.

Despite an inspired 65-run final-wicket stand from Haddin (71) and James Pattinson (25no) that started with the tourists still needing 80 more, Australia were forced to watch on in despair as England celebrated wildly in front of a sold-out 17,000-strong crowd at Trent Bridge.

After being set a Trent Bridge record 311 to win, Australia needed 137 on day five.

But Anderson took the four wickets England needed for victory, and justified his reputation as the premier fast bowler in the world, with 10 for the match.

He bowled 13 straight overs to start day five and briefly went off the field for treatment.

But when Australia came back from lunch needing just 20 more to win, Anderson was there to greet them and, three overs later, he ended the match.

Australia were looking to exorcise their demons from their horror two-run loss to England at Edgbaston in 2005, which played out in eerily similar circumstances.

On that fateful day, Michael Kasprowicz and Brett Lee put on 59 for the last wicket to get within two runs of chasing down 282 – before Kasprowicz contentiously gloved one behind.

But instead of revenge, the nightmare continued.

“It probably does hurt you more when you are captain because I guess you’re a little bit older and I care so much about the guys that I’m surrounded by,” Clarke said.

“That’s part of my job now to make sure all the boys are up and ready for what lies ahead in four days.”

Australia have lost three Ashes Tests in a row for the first time since the 1980s and they’re also on a five-match losing streak for all Tests played in 2013 – with their worst mark being seven straight losses.

With Ben Horne and AAP