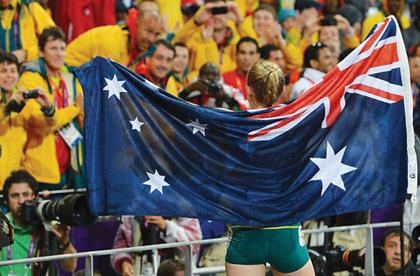 AUSTRALIAN Olympics Inc failed to meet the bottom line expected by stakeholders in London and will examine its business model to ensure there is no profit forecast downgrade at Rio in 2016.

Having targeted a top five finish, Australia scraped into the top 10 with seven gold medals, being thrashed in the “Ashes” by third-placed Britain and falling behind other European nations Germany, France, Italy and Hungary, with Japan, Holland and Kazakhstan breathing down its neck and trans-Tasman neighbours New Zealand just two gold medals behind.

The seven gold – three to the sailors – was a dramatic halving of the 14 won in Beijing four years ago.

In order to achieve fifth place, Australia would have needed to almost double its gold medal count to 13 to overhaul South Korea.

The result was the fewest golds for the nation since the 1992 Barcelona Games, where it also won seven.

Australia found it difficult to convert minor medals into major ones, despite the euphoria of victories to stars like hurdler Sally Pearson and cyclist Anna Meares.

Despite calls for more money by individual sports leaders such as hockey’s Ric Charlesworth, Australian officials stressed they were happy with current funding, which has delivered record amounts to high performance sport in the past four years.

He drew the analogy with the dog-eat-dog world of commerce when he said: “In any evolving industry which is globally competitive you need to continue to re-evaluate where you stand.

“The money that we’ve got – how do we continue to invest that wisely to get the best outcomes?

“It’s no different to an evolving business with significant international interests. In the world of sport there’s no bigger global stage (than the Olympics).

“We as a team have been prepared to put ourselves on the line,” Green said.

“We have set very high expectations and very high benchmarks. As a high aspirational team we want to be top five in the world.”

Green said every sport would return from London to evaluate its performance.

“Some will say we didn’t get the medals we predicted, some will say we got more medals than we thought we would,” he said. “There’s both sides to it. The end position is I think our team has performed exceptionally well.

“Personally I am proud of the way our athletes have conducted themselves. They were humble in defeat and gracious in victory. We have a very strong culture which is embedded and passed on.”

“The athletes are happy to leave themselves open to criticism because they want to be the best in the world.”

Green said his personal highlights included back-to-back gold medals for sailor Malcolm Page, who he selected to carry the Australian flag in Sunday’s closing ceremony, and the gold medals won by Pearson and Meares within an hour of each other in the middle of the Games.

One exciting pointer to the future, he said, lay in the fact that more than half of Australia’s 410 Olympians competing in London were debutants.

How did you think Australia performed at London 2012?