Aussies crushed by India on day five of the first Test

The Aussies have gone down to India by 8 wickets on day five, with a unbeaten 81 from debutant Moises Henriques the only positive to come out of the Australian second innings. 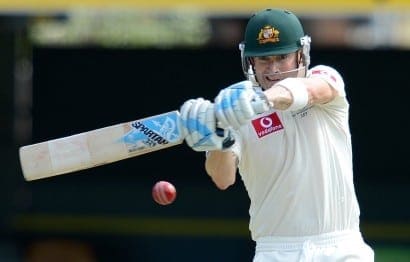 AUSTRALIA has suffered a crushing defeat in their first Test against India in Chennai, despite managing to hold on until day five.

At one stage it looked like India would not even have to bat their second innings, however a last stand by Nathan Lyon and test debutant Moises Henriques saw them at 9 for 232 on day four.

The pair were unable to continue the form, adding only nine runs to the overnight score on day five. Lyon was caught out, leaving the hosts with just 50 runs to chase to take out the Test.

Despite India losing two wickets early they easily reached the total, with Sachin Tendulkar bringing up the winning runs.

Despite some criticism of the pitch before the match MS Dhoni scored a double hundred, with centuries going to Aussie captain Michael Clarke and Indian batsmen Virat Kholi.

Australia had gone into the test with four pace bowlers and just one full time spinner, a highly controversial move on India’s notoriously spin friendly pitches.

Clarke made no excuses following the match and said he felt Dhoni’s double tonne had been a game changer.

“Dhoni was outstanding…I certainly think that innings changed the game from our perspective,” said Clarke.

Clarke admitted they had simply been out played, but his mind was already onto the second Test in Hyderbad, starting this Saturday.

Dhoni said his 224 in the first innings had been extra special, as it was his first Test in Chennai.

Australia face another three test matches against India on the sub-continent, before heading to the UK in June for the first of two back to back Ashes series.