Blow for Boomers as Andrew Bogut is forced to withdraw from the London Olympics. 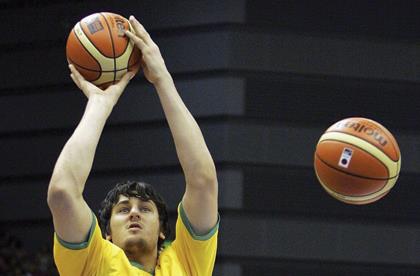 AUSTRALIA’S Andrew Bogut says he is shattered to miss the London Olympics after being forced to withdraw on Sunday.

NBA star Bogut will have arthroscopic surgery on the ankle he broke in January, and will not be fit enough to play for the Boomers at the Games in July.

“After seeing a specialist I have decided it would be best to get my ankle cleaned out via arthroscopic surgery,” Bogut said on Twitter.

“There is simply not enough time to rehab and be fully fit for the games.

“Shattered thinking about missing the 2012 Olympics.

“They truly are a life-changing experience and something that you will always remember.”

Bogut was always facing an uphill battle to be fit for London after fracturing his ankle, then being traded to Golden State Warriors, for whom he is yet to play a game.

As Australia’s highest-profile basketballer and a two-time Olympian, Bogut was to be one of the cornerstones of Australian coach Brett Brown’s plans for London.

While the 27-year-old’s withdrawal is a blow, the Boomers do at least have strong depth in the centre’s role.

European-based David Andersen will most likely shoulder the bulk of the inside responsibility in Bogut’s absence.

Emerging Aleks Maric, who was outstanding for Australia in the recent Olympic qualifiers, AJ Ogilvy and Aron Baynes are also playing in Europe.

Brown admitted Bogut was a “game-changer” when fit, and his loss would mean a shift in playing style for the Boomers to what he had originally planned.

But Brown pointed out the NBA star had not played a match for Australia since he had coached the side.

“I believe that the group that we now have will be more effective in an open court type of game and the responsibility to put them in their best environment to succeed rests with me.”

Golden State Warriors general manager Larry Riley said Bogut’s surgery was likely to ensure he would be fit for the start of next NBA season, and labelled the procedure “routine”.

“I characterise it as something that is as much a preventive thing than anything else,” Riley told The Associated Press.

Bogut’s NBA career has been blighted by injuries despite his imposing record when he has been fit for previous club Milwaukee Bucks.

The 2005 No.1 draft pick had serious elbow and wrist injuries hinder him last season, before the NBA lockout, personal issues which forced a mercy dash to Australia and his ankle injury hampered his 2011-12.

It is the second blow to Australian basketball’s Olympic hopes after women’s star Penny Taylor was ruled out of the Opals team for London following a serious knee injury. – AAP