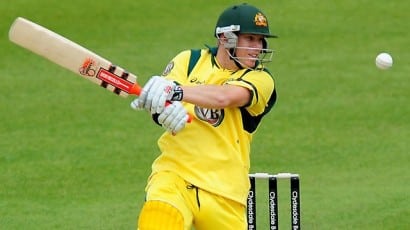 The tourists nearly came unstuck inDublintwo years ago only for James Hopes to extinguish Irish hopes with 5-14 with his medium-pacers.

And nobody in the cricket world will forget in a hurry Kevin O’Brien’s jaw-dropping century against England during last year’s World Cup as Ireland chased down 328 in Bangalore.

The home side will be boosted by the presence of debutant Tim Murtagh, the Middlesex swing bowler who dismissed Ricky Ponting, Michael Clarke and Cameron White for his county side in 2010.

That is, if the weather clears in time with persistent rain at the Civil Service Cricket Club in Stormont threatening to spoil the occasion.

“They are a team that can come out and blast it from ball one,” Warner said.

“We are really looking forward to the challenge.”

The Australian team opened their tour with a comfortable 102-run win over Leicestershire in a weather-affected match atGrace Road.

Warner said the stop-start affair was perfect preparation for Australia’s new-look squad with half of the players having never played an international one-dayer inEngland.

The powerful left-hander looked in fine touch by cruising to 74 from 78 in Leicester before retiring to allow his teammates to have a hit.

“We have come here to win eight matches, we have won one and have seven to go,” he said.

“We want to make the most of every opportunity at staying No.1 in the world.”

Former England U/19 seamer Murtagh opted to qualify for Ireland through his grandparents because he felt he was too far down the pecking order for England.

“It’ll take them some time to adjust back to English conditions and hopefully that’s something we can exploit in the game inBelfast,” Murtagh said this week.

“They’re world-class players, but if we can catch them a little bit on the hop, it does take time to get used to conditions, especially with the amount of rain and dampness we’ve had around in the early part of summer.”

Clint McKay (4-31) was another to enjoy his first outing of the tour against Leicester, cleverly using his slower ball to remove the county players.

WithAustralia’s five-match one-day series againstEnglandstarting on Friday at Lord’s, the English brains trust was keen to scout the opposition at Grace Road.

They sent video team analyst Gemma Broad out in the gloomy weather to film the Australian bowlers in action.

James Pattinson would have been of most interest for the locals with the young speedster making his maiden appearance in English conditions. —AAP