Australia's team for the third Ashes Test starting on Thursday is little clearer after tour match against Sussex in Hove. 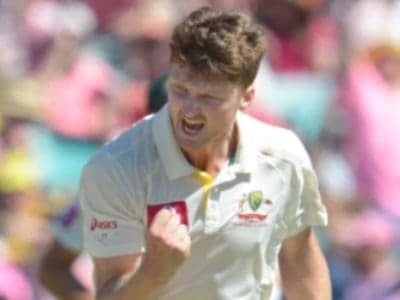 AUSTRALIA’S tour match against Sussex has ended in a draw, and little has been resolved about the team’s make-up for Thursday’s third Ashes Test at Old Trafford.

Aside from a century to Steve Smith in the first innings, no Australian was really able to impose themselves on the match at Hove with bat or ball.

Ed Cowan (66, 77 not out) made two half centuries to remind selectors what he’s capable of, but it’s unlikely to be enough to force his way into the Ashes squad ahead of Shane Watson, Chris Rogers or Usman Khawaja.

Phil Hughes made 84 and 38 to ensure he still tops the aggregates for the tour with 436 runs, but it’s probably not enough to keep him in the team.

David Warner is expected to be rushed back into the No.6 position at Hughes’ expense. If Hughes is dropped it will be for the third time in his 26-Test career.

Nathan Lyon (1-99) bowled decently but only took the one wicket.

Selectors face a tough dilemma over whether to stick with 19-year-old Ashton Agar (1-66), or elevate the more experienced Lyon, who was unlucky to be dropped in the first place.

Jackson Bird [pictured] (2-62) was the pick of the quicks on day two, but Mitchell Starc (2-43) overshadowed him on day three.

Both finished with two wickets apiece in their bowl-off for the final place in the pace attack for Manchester.

Bird’s control may have edged him in front, but Starc’s left-arm provides more variation to complement Ryan Harris and Peter Siddle, who will both play at Manchester.

At close on the final day of the three-day fixture, Australia were 2-152 in their second innings, after Sussex had earlier declared with a two-run first innings lead at 7(dec)-368.

Starc said he didn’t view it as a selection trial.

“We certainly weren’t taking it as a bowl-off; it was just to go out there and perform,” he said.

“I tried to put the thought of pushing for selection out of the picture and just try and take wickets.”

Khawaja appears set to hold onto the No.3 position for the third Test by virtue of top scoring for Australia at Lord’s with a second innings 54.

But Khawaja’s scores of 40 and 1 at Hove left plenty to be desired, and he’s failed to completely lock up his place, with Warner waiting in the wings.

Starc said Australia had got what they wanted out of the match, with the exception of some sloppy dropped catches which prevented them from bowling Sussex out.

“It was a good game to get what we wanted in terms of time at the crease and for some of us overs under the belt in the middle as opposed to in the nets,” he said.

“It was good to get some competitive time in the middle for a lot of us who haven’t had too much of that I suppose.

“We probably need to be a little bit tighter and shut that scoreboard down. It definitely helps when you hold your chances.”

The certainties to come out of the match were that Smith’s 102no should ensure he’s there for the rest of the series, wicketkeeper Matthew Wade is no chance of forcing his way in as a specialist batsman after making 0 and 30no, and pace bowler James Faulkner (1-55) has a way to go yet.

On day three, England squad member James Taylor showed Australia how to bat ‘ugly’, bringing up an unbeaten 121 that was nearly six hours in the making.