Australian skier Anna Segal has heartbreakingly just missed out on a slopestyle medal, finishing fourth at the Winter Olympics. 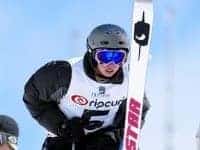 It was close, but no Segal.

Slopestyle skier Anna Segal came within a whisker of capturing Australia’s first medal of the Sochi Winter Olympics when she finished fourth on Tuesday.

In a tense finish to the new Games event, Segal (77 points) was pipped by the last skier that could overtake her position, Canadian Kim Lamarre (85) snatching the bronze on her second run of the final.

Lamarre’s compatriot Dara Howell (94.2) had blown everyone out of the slopestyle park with a stunning first run to finish a comfortable first ahead of American Devin Logan (85.4).

Segal, the 2011 world champion who has been carrying a left knee problem for more than a year, laid down a solid first run but had a nagging feeling it wasn’t going to be enough even as competitors fell or scored poorly around her.

“I kind of knew. I know Kim really well, she’s one of my close friends and I know her skiing and I know what judges reward. And I saw her stomp (land) everything and I’m like ‘yep, she’s got it’.”

Segal’s second run unravelled initially on the rails section but bombed when she was undecided about doing a two or two-and-a-half spin trick on the final jump.

She did something in between and crashed out.

The high drama that played out at Rosa Khutor Extreme Park was something of an extension of Segal’s last year.

After damaging her knee at a World Cup event in Switzerland early in 2013, things never really picked up and she had struggled in competition without a significant result since.

If not for the Games, she would’ve packed in her season some time ago.

“I probably would have gone home and had surgery,” she said.

“There was never a stage that it was too hard. It was whether they (officials) were going to let me compete – it got to that stage.

“Once I started skiing on my knee, I knew that I’d be able to get here.

Segal had qualified in seventh place for the final, her score actually higher than what she managed during the decider.

Australia have had four top-eight finishes at the Sochi Games but, at this stage, there are no medals.