by Benjamin Durance
in Sport

The final day of season 2016 for AFL London took place at the weekend under blue skies and a beaming sun.

The day started off bright and early with the South London Demons controlling the Social division decider from start to finish to claim back-to-back premierships against a courageous Reading Roos. Demons midfielder, Brett Hoare was awarded ‘best on ground’ honours for his tireless work through the middle of the ground. The final scorecard read 8.10. 58 to 3.2. 20. The Conference division pitted the Clapham Demons against the Shepherds Bush Raiders who were attempting to win their 7thstraight premiership. In a see-sawing affair the Demons jumped out to a 10-point lead with 9 minutes on the clock in the fourth. They eventually held out for a thrilling 3-point victory in what turned out to be the match of the day. High-flying Brazilian winger, Ricci Leumann of the Demons became the first non-Australian to be crowned ‘best on ground’ in an AFL London Grand Final as he repeatedly provided the crucial link between the backs and forwards for the Clapham side. The final score in this match was 8.2. 50 to 7.5. 47. A first-time premier was set to be named in the Women’s division and it was the Wimbledon Hawks who were crowned champions in a demolition of the North London Lions. The girls from the Hawks were unstoppable from the first bounce and finished their perfect season in style holding their opponents scoreless. The Lions should hold their heads high after fighting valiantly all day in front of a large crowd of supporters. Lauren Sparks of the Hawks finished as ‘best on ground’ in a clinical display through the midfield. Final score reading 10.5. 65 to 0.0. 0. 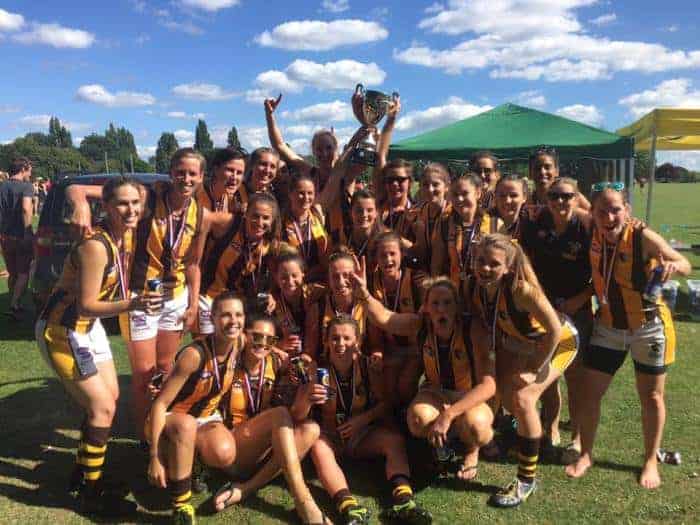 The final game of the day was the much anticipated Premiership division decider between arch rivals the West London Wildcats and the Wandsworth Demons. Unfortunately, the game didn’t live up to its hype as the Wildcats controlled the tempo of the match and never gave the Demons a sniff. The boys from the West proved too fast and skilful for their opponents whose ill-discipline and turnovers at crucial moments proved costly. The Wildcats were best served by midfielders Todd Pfeiffer and Andy Challis, but it was captain and full-back, Jared Risol, who deservedly claimed ‘best on ground’ honours for his role in constantly repelling Demons forward entries and launching his side onto the offensive. The final scorecard reading 14.10. 94 to 7.1. 43. (see top image)