AFL LONDON | Finals week 2 wrap: 'Cats prove they have nine lives in making Grand Finals while Dees and Emus also get through to deciders.

by Joshua Pearson
in Sport 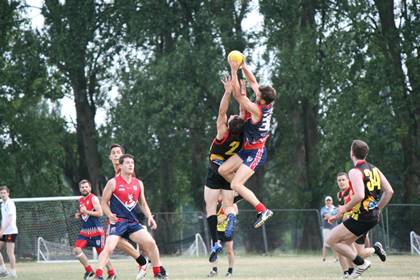 The AFL London Grand Finalists have been decided for 2014.

The West London clubs have shown exactly how valuable the second chance can be by bouncing back from two tough defeats last week to book their spots in the season deciders. West London now has all three teams in the big games this Saturday, while the Demons’ Conference team joined their Premiership clubmates, also qualifying for the season decider.

Sometimes, a close loss like the one the Wildcats experienced last weekend can be tough to recover from. Sometimes, the experience brings the unit closer together. At the start of this excellent contest between two proud clubs it appeared to be the former for West London when, after a tight opening ten minutes, the Lions found another gear and kicked the first four goals of the game.

Wildcats fans would have been groaning in disbelief at such a start. Until that moment, the game had been scoreless and the ball had been stuck in the midfield with neither team giving an inch to their opponent. The Lions went to the sidelines at quarter time confident that they could pull off an upset.

However, everything that went wrong for the ‘Cats in the first quarter, went right for them in the second. They came charging out of the blocks to kick five unanswered goals thanks to some excellent midfield work by Brad Wedgwood and with Brad Collins showing his strength and skill up front. The second quarter was all West London but when the Lions kicked a goal just before half time, the ‘Cats lead was down to four and the scene was set for the fur to fly in the second half.

North London kicked two goals in the first five minutes of the third quarter to open up a lead and they were looking to run away with it in the premiership quarter. But excellent work by Matt Shannon at Centre Half Back meant that West stopped North’s many attacks before they became too dangerous and when he started running the ball out of defence and assisting his midfield, the contest tightened up yet again for the remainder of the quarter with neither team willing to give up on their dreams of a Grand Final appearance.

In the final quarter the Lions kicked the opener and their lead was extended to nine points, a lead that they held onto until the last minutes of the game. Just when it looked like the early season favourites were going to be knocked, James Ford took a courageous mark running back with the flight of the ball and, with the next kick, found David Abernethey who slotted it home with only a minute to play. West London then got a quick clearance from the next centre bounce and streamed forward to kick the game winner with only thirty seconds left on the clock.

Having got up in this contest, they now go on to face the Wandsworth Demons in the 2014 AFL London Grand Final with renewed vigour and confidence.

The Lions had been soundly beaten the week before by Shepherd’s Bush, while Clapham had made short work of the London Swans to setup this match.

The Demons started fast and hard in this game and they didn’t let up for the rest of the encounter. This was always going to be a tough game for the Lions. The loss to the Raiders the previous weekend was the sort of defeat that can take some time to bounce back from and in their defence, one week just wasn’t enough time. Especially with a spot in the Grand Final up for grabs, the Lions needed early goals to get some confidence back but, unfortunately for them, they just weren’t able to make it happen.

The whole of the Demons lineup was fired up, knowing that a title showdown with their bitter rivals was theirs for the taking. As a result, their midfield got hands on the ball early and often, feeding a forward line that was goal hungry, despite the best of James Logan and Trev Lonie who made the Demons forwards work for everything that they got.

Jimmy Boot ran all day for the Lions and didn’t stop competing. But any time the Lions were able to get some momentum going and get the ball inside 50, which did happen regularly, they were met by a determined Demons backline looking to nullify key forward Luka Skrzypinski, who was always a threat when he got hands on the ball.

Dave Ronan took some excellent marks for the Demons who were well led by Michael “Shoulders” Blythe and, with an 85 point victory, the Demons booked themselves into the final match of the year.

Much like their Premiership brethren, Ealing had lost a tight one to the Giants the week before. As a result, the Emus had to win this one to stay in the competition.

Reading had come through a bruising encounter with South London the week before and as two time defending champions, appeared to be hitting form at just the right time of the season.

Unfortunately for Reading though, three titles in a row proved to be too big of an ask for the club as Ealing put them to the sword. Led by Ryan Bark in a backline that managed to hold Reading goalless, and an outstanding Naamon Whiteman, Ealing ran away with this match to setup a chance for revenge against the Giants this weekend.

AFL London in Season 2014 is proudly supported by Sanza Teaching.  The Grand Finals are played this coming weekend. To find out more and to get involved, visit www.afllondon.com 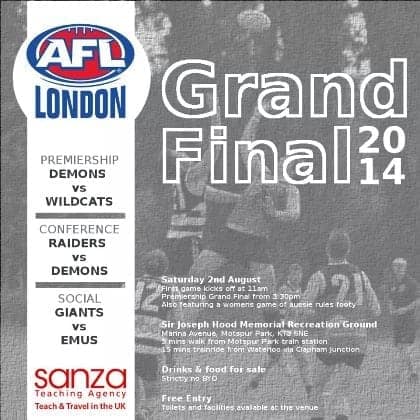