A man on a mission: Jamie Soward joins the London Broncos 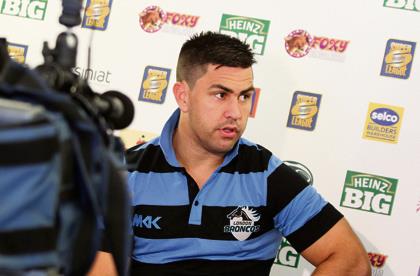 LIKE most boys, I grew up supporting the same footy team as my Dad. Despite being born and raised in Sydney’s Eastern suburbs, I was given a St. George Dragons jersey before I was even given a bottle. It’d have been rude not to.

Many weekends saw us on the hill, waving our flags and singing our team song. My best memories however came from the drive to the game. This is when my Dad would fill my head with St. George folklore: the world record 11 straight premierships and tales of club legends Billy Smith, Graham Langlands and Johnny Raper. I would imagine their heroic feats from his very vivid, and what I’m sure were slightly exaggerated, retellings of ‘the glory days’.

I used to listen to these stories like they were mythological legends of Gods and Kings. Looking up to my Dad I loved hearing him tell stories about the people he admired. I would be just the right mix of intrigued and envious: “Why wasn’t I born to see this?”

Patiently I waited for a player to join my beloved team I could call my hero, one I would one day be bragging to my kids that I saw play.

In Round 12, 2007, a headgear clad kid named Jamie Soward donned the Red V for the first time and ran out of the tunnel at Kogarah. In what could only be described as a struggling season the Saints needed something. Soward stepped up, instantly injecting some much-needed lifeblood into the dwindling club. He won the match for us against reigning premiers, The Brisbane Broncos, with a match winning field goal and never looked back.

From that day on he excited the Dragon faithful regularly. His passion for the jersey was unmatched, running out of the tunnel hammering the crest over his heart. His blistering, length-of-the-field tries, his individual creativity and his long-kicking game impressed the crowds. “Finally,” I thought. “My player has arrived!”

In what will always be remembered as a bittersweet day in his life, Soward first achieved his life-long dream of playing first grade footy in 2005, making his debut for the Sydney Roosters sadly on the same evening he lost his father. Coincidentally, it’s this very juxtaposition which has haunted his career ever since.

In the past seven seasons we have seen him become St. George Illawarra’s highest ever point scorer. He has won an Origin game with a match winning play, he pulled out the big play when Saints were 10 minutes away from making the Grand Final when he kicked the now legendary field goal in the final against the Tigers. Then of course there was the greatest day of any Dragons fan’s life: the 2010 Grand Final, where Jamie set up the first try and kicked us to victory.

In short, I just loved watching this kid play.

Sadly, in April 2013, amidst unconfirmed rumours and speculation of a souring relationship with the Dragons head coach Steve Price, Soward signed a four year deal which will see him move to the Penrith Panthers in 2014.

It is a move which broke many fans hearts and turned stomachs at the very thought of seeing our premiership winning half in another teams jersey.

Soward respectfully deflects a question about this relationship, and instead chooses to focus on his future.

“I made it pretty clear that I wanted to see out my career with the Dragons” Soward says about the move.

“Going forward the club hadn’t offered me anything and I knew they were looking to rebuild.

“We came to a mutual agreement and I’m looking forward to my time at Penrith.”

When asked about his time at the Dragons, Jamie let the back of his footy card do the talking.

“When I came to the club in 2007, if you had said in the next five years this guy is gonna win the competition, play state of Origin and win a World Club Challenge most fans would have been happy with that.

“I’m very happy with that. I had a great time at The Dragons.”

Bittersweet at the buzzer

After announcing his exit from the Dragons, bitter sweetness kicked in again. During a round 12 match against the Bulldogs, a game which saw the playmaker pass 1000 career points, Soward failed to level the game with a missed conversion attempt right on the buzzer.

He was immediately dropped to feeder team the Illawarra Cutters. Sadly, that moment was to be Soward’s last in the big red V.

“That the most disappointing part, I didn’t get the chance to say goodbye to everyone who supported the Dragons.

“I have had so many well wishers. I’d just like to say thanks for all the support and hopefully we’ll see you around.

“Hopefully when I play for the Panthers we can get a win and I’ll wave goodbye then.”

Just like in 2007, Soward was at a career crossroads. Dropped by his club and playing park footy at a standard well below what this premiership winning half was accustomed, he applied for an early release. The Dragons agreed and for the second time in his career he became a mid-season signing. Only this time it’s on a short term deal here in the UK with the London Broncos.

“Back home I was playing reserve grade and I didn’t think it was going to further my football,” Soward says.

“I got the call from Tony Rea (the London Broncos coach) to ask if I was interested to come over here.

“I asked for a release and headed over to play with some world class opposition and enjoy my footy again.”

Attending his first match for London, you could tell Soward was a man on a mission. Stepping off the plane at 6.30am and eager to play Soward showed his class by scoring 14 points on his debut. The small crowd which showed up for this match were on their feet cheering, despite the final 30-44 score line.

If one thing can be said about Soward, despite the criticism which may have followed his career at every step, he nonetheless gets on and plays his game.

I’m often asked why Soward is my favourite player, and I simply put it like this:
I have never seen a player like him.

He is, by his own admission, not the best, but strives to be the best. From day one his footy career has been full of adversity, and people telling him he’s not good enough. Yet he keeps on pushing on and doesn’t let it stand in his way. He has demanded perfection from himself, and commanded those around him to pay attention.

I loved cheering him on at the Dragons and will fear every moment he’s out there against us.

See Londonbroncosrl.com for more information on match schedule and tickets.