A disastrous day to be a Pom! The state of a beleaguered cricket nation

With the Ashes gone, CHARLIE INGLEFIELD assesses the current state of the English cricket team and ponders what can be done in the aftermath of the Perth massacre. 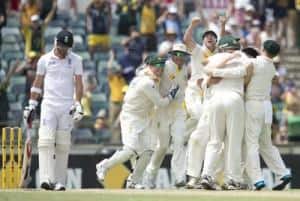 AUSTRALIA thoroughly deserved their reclaiming of the historic Ashes urn. What has been most impressive about their performances thus far is the manner in which they have totally outplayed a decent England team in all facets of the game. More worryingly from an England perspective, Australia have had more energy, enthusiasm and better body language all the way through the series. In short they have made England look pedestrian and ordinary.

There is much to ponder within England’s ranks as they stare down the barrel of what has been a disastrous series ever since Mitchell Johnson snared Jonathan Trott in England’s first innings at the Gabba. It has been downhill ever since and the poms have had no answer in combatting Australia’s dominance. What will worry the hierarchy at Lords is the long term impact of this defeat. At least in 2002 we saw the emergence of Michael Vaughan as a world class batsman, likewise with Paul Collingwood in the 2006 drubbing. In this series there have been very few positives. We have had to wait until the last rites on the final day of the third test to applaud a century from an England batsman and a very good one at that from Ben Stokes.

So the inevitable question is where does England go from here both in the short and long term. With two tests to play there will be the temptation to bring in the likes of Johnny Bairstow and Gary Ballance to shore up the batting. Stuart Broad, England’s best bowler to date, is unlikely to make the Melbourne test so maybe Steve Finn will come in to see whether he can spark the England attack. Or perhaps Andy Flower will say to his team with a particular focus on KP, Graeme Swann and Matt Prior, ‘you have two tests to save your test career’? Harsh but fair given how poorly England have been with the bat since the turn of the year. This has been a team in decline for the last 12 months and the likes of Prior and Swann are struggling to justify their places. These guys rightly have their place amongst the very best cricketers England have produced in the last 50 years but eventually all good things come to an end.

If we analyse the batting, pretty much what needs to be said has been said ever since England’s first innings at the Gabba. England have unluckily lost three successive tosses but there can be no excuse, England have simply not put the Australian batsman under pressure because of our weak batting leaving our bowlers knackered and letting the likes of Warner and Clarke come in and hammer the attack to all parts. There is a big question mark around Kevin Pietersen, namely what to do with him. On one side of the coin, people will say that he is still worth his place in the team just because when he does fire, there is no other batsman on the planet who can play the shots that he does. On the other side, what lesson does it give to younger members of the team watching KP, an experienced member of the team; get out to tame dismissals over and over again. Infuriatingly KP has not looked in the least bit troubled when Johnson has been firing his thunderbolts but his ego gets in the way when Siddle and Lyon come on and he gets out very quickly. I feel that Kevin is worth another series because when watching his 45 in England’s second innings; he made it look so easy.

Matt Prior on the other hand needs a rest, possibly a permanent one. We have always admired his bulldog spirit and he has had a magical couple of years with gloves and bat but this series he simply has not performed. I would be tempted to give Bairstow the gloves and see how he keeps and whether he can get those crucial runs down the order. That said, dropping your vice-captain when the team is down may strongly contribute to a very possible 5-0 thrashing come the end of the Sydney test.

Graeme Swann, Monty Panesar and dare I say it Jimmy Anderson must also question whether they can continue at test match level. For Jimmy this is extremely harsh but would this be the time to step down? These are all very difficult calls and whatever happens in the next two test matches, Andy Flower, who I think should continue in his role, needs to sit down with Alistair Cook and work out what direction his squad goes in.

I agree with Andrew Strauss when he spoke about Cook needing to distance himself from the close friendships he has within the team. Being the captain you have to make tough calls particularly in their current situation and with world class players who have a voice i.e. Anderson, Swann and KP. There was also an interesting piece in the Sunday Times when Justin Langer and Strauss were comparing notes on previous Ashes’ encounters. When Australia lost the 2005 Ashes, they sat down as a group after the series and worked out a strategy to build for the 2006/7 series. Very few players were dropped and we all saw what happened when Freddie Flintoff took his team to Australia. Andy Flower and Alistair Cook need to do the same as soon as the Sydney test is over.

I genuinely think England gave it everything in this series but there has not been a plan B let alone C. They had the air of a team who expected it to happen given the series this past summer but everyone knew that Australia got very close and the return leg of the 2013 Ashes was going to be very different.  Australia have held a big grudge since August and have reacted (some would say maybe a bit too much) like the classic school yard bully. They have obliterated England and they deserve all the credit which comes their way.