When the solution solves nothing

POLL POSITION: Julia Gillard has spent the last week defending her decision to deport asylum seekers to Malaysia within 72 hours of their arrival into Australia. However, it remains unclear what problem this policy will solve.

by Kate Ausburn
in News 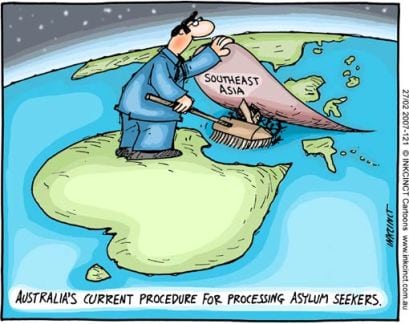 PRIME MINISTER Julia Gillard has spent the last week defending her decision to deport asylum seekers to Malaysia within 72 hours of their arrival into Australia.

Dubbed the “Malaysia Solution”, it remains unclear what problem this policy will be able to solve.

As the first boatload of asylum seekers to be processed under these new immigration policies arrived at Christmas Island, Australians remained unconvinced about the strategy.

The boat carried 55 people from Afghanistan and Pakistan – unsurprising given we have been engaged in a 10 year war and occupation of Afghanistan, and Pakistan is the target of careless US drone strikes, both conflicts having needlessly killed thousands of civilians.

But our Immigration Minister Chris Bowen stood firm, suspicious of the youngsters on board the boat, he told The Australian there were 19 people “who are either clearly minors or who are claiming to be minors”.

Unmoved by the plight of these young people, Gillard told the ABC that she would not rule out the use of force against asylum seekers if that was what it took to see them board planes waiting to deport them to Malaysia.

“Obeying instructions here is not a question of volunteering,” she said.

When quizzed by journalists about whether this deportation rule would apply to all new arrivals, Gillard said: “There will be pre-assessment procedures, then there will be returns to Malaysia.”

With many Australians concerned especially for the welfare of children arriving subject to this new policy, Gillard has been quick to note that there will be “no blanket exceptions”. In other words, the children will be deported too.

And as if that’s not enough, the Government plans to film the security and police forces as they detain the asylum seekers, and put them onto planes out of Australia. They will then upload it to YouTube. Feeling that Aussie pride yet?

But this is just all part of our Government’s clever plan to go about “smashing the people smugglers’ business model,” or so Gillard told Tony Jones on ABC’s Lateline.

Because, she said, ‘Australians simply don’t want to see people risking their lives on a dangerous journey’. Perhaps what Australians don’t want is our government assuming we’d be happy to have her, in our name, decide to send people who’ve come from torture and oppression to be sent for more of the same.

It is widely accepted that a problem is best solved by stopping it at its source. If your leg is gashed open and bleeding, you don’t simply place a cup under the wound to collect the blood, you dress it and let it heal.

Yet when it comes to displaced people, instead of assisting to end wars like those in Afghanistan and Iraq, and stop funding genocidal government’s like that of Sri Lanka, we let the people bleed from the countries, while we continue dropping bombs and sending aid.

Gillard reasoned her harsh policy away, these people may not in fact be “real refugees” she told the ABC, and really, “We’re a generous nation, we take people in need from around the world.”

With boundless plains to share? Tell that to the deportees.