We’ll give anyone a chance, rioters included: Aussie Group

A top London-based Australian entrepreneur has dismissed poverty and a lack of employment opportunities as justification for the London riots. 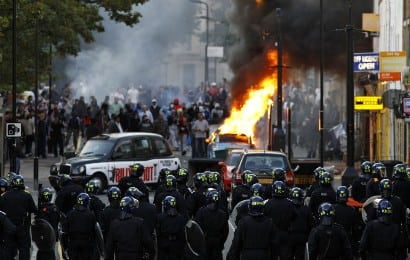 BRIAN BURGESS, chairman of the highly successful Aussie Group, said jobs existed in Britain for anyone with a will to work and has rubbished the notion the London riots were fuelled by youth unemployment.

He said his company, which employs nearly 200 people in the Wandsworth borough alone, would continue to give opportunities to under-privileged youths who showed initiative and drive, regardless of their background.

“They’ve got to have a will to work,” Mr Burgess told Australian Times.

Mr Burgess, who arrived in the UK in 2000 with £300 to his name after failed business dealings in Australia and subsequently built a multi-million pound London empire, said he was working with the Wandsworth Council to help youths from under-privileged backgrounds find work.

“There are a lot of people in the Wandsworth borough. We’ve spoken with the council and offered our business as a base to mentor young people,” he said.

“At the moment we have half a dozen young guys who are in the same age group as most of those who were out rioting, from minority groups, who are working with us and doing just as good a job as anyone else.

“They were on our doorstep, just loitering, hanging around, not working. We asked them to come in, some accepted the offer and now they are driving, cleaning and getting involved.

“By taking them in, we’ve given them another chance but they had to say yes too. Their lives are better as a result.”

Several alleged looters and rioters were broadcast in the aftermath citing numerous reasons for participating, which included lack of employment opportunities, poverty and opportunism.

But Mr Burgess, who also counsels and mentors drug and alcohol addicts, urged youths to avoid taking on a “victim mentality”.

“I think there was a certain sense of entitlement among the youths doing it,” he said.

“If you pulled a guy up with some Hugo Boss suits under his arm and some new trainers and asked him: ‘why did you do it?’ If he answered truthfully, he would probably say ‘because I could’.”

Mr Burgess said more encouragement was needed for young people, particularly males, to seek training or an apprenticeship once they became disengaged in the classroom.

“Apprenticeships and training have a lot of merit,” he said.

“We need to train kids who are disengaged with the academic stuff with skills they can use in the world and build up their self esteem because if they are sitting in a classroom feeling miserable about themselves then they’re hardly going to learn anything, are they?

“There are so many pathways a young person can take it doesn’t matter if they don’t get into Oxford or Cambridge.

“People feel good about themselves when they are paying their own way, but people can’t do that unless they get opportunities. And I guess that’s what we’re trying to do at Aussie Group.

“All people need to do is get off their backsides and come and talk to us.”

Read all about: The Aussie Man behind the Van