Strong winds could fan an out-of-control bushfire in Victoria’s southwest as the state’s north prepares for a day of severe fire danger. 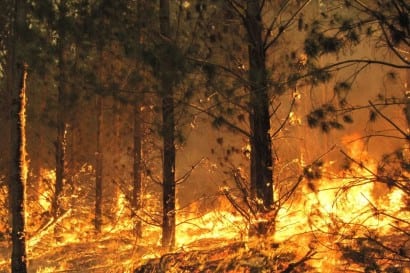 A MASSIVE bushfire could potentially double in size and hit small farming communities in Victoria’s southwest, as the north of the state faces severe conditions.

There is a threat to lives and property with the southwest Victorian settlement of Drik Drik under direct attack from fire and embers, authorities said on Monday night.

An afternoon wind change swung the 4000-hectare Kentbruck fire on a path to Drik Drik, an agricultural farming area of about 30 houses.

Authorities warned the out-of-control bushfire had the potential to double in size to 8000 hectares in an afternoon with westerly to south-westerly winds of up to 40km/h on Tuesday capable of pushing the fire a significant distance.

Fire services commissioner Craig Lapsley said the immediate concern on Monday night was the Drik Drik area but the key issue would be on Tuesday.

“It will be a fire that will be pushed with winds and we believe that it’s got the potential to move significant distance tomorrow, potentially block the Princes Highway and have further impacts on the rural community around Drik Drik and Dartmoor,” Mr Lapsley told ABC TV.

Nearly 500 firefighters and a dozen aircraft are battling the blaze, which started on Friday and has mainly burnt through pine plantation.

The Country Fire Authority (CFA) said there had been no reports of property damage or loss of life by early Monday night, dismissing earlier rumours that at least one home had been impacted by the fire.

A spokeswoman said there was still a risk to lives and property.

A number of roads have been closed and most of the 250 residents of nearby Dartmoor have already left the town.

Mr Lapsley warned the next 24 hours would be critical, but he said the Victorian towns of Portland, Nelson, Heywood and Mt Gambier in South Australia were unlikely to be directly impacted by the fire.

“We are doing significant planning on the potential of how large it could get, that is not a scenario that we would see at this stage, where those major centres would be impacted by this fire,” he told reporters at the State Control Centre in Melbourne.

“It would need a significant run of fire that is not predicted, however in this general area it could increase from 4000 to 8000 hectares in size in an afternoon so it has potential to move, but not to move to impact on major centres.”

Mr Lapsley said the main concern on Tuesday was for northern Victoria, which faces yet another day of hot conditions, with total fire bans declared in the Mallee, Wimmera, Northern Country and North East fire districts.

He said there was a severe fire danger stretching along the South Australian border, the Murray River and the NSW border.

Lightning strikes have already sparked blazes in north-eastern Victoria and there are also fears that fires across the Murray River in NSW may reach Victoria if they take hold.

Northern parts of the state have experienced several days in a row above 40C.

Mr Lapsley said lightning strikes could take a day to become a fire.

The hot conditions have kept ambulance crews busy, with paramedics attending 450 heat-related incidents in the past four days including between four and seven children being left in cars each day. – AAP