The Victorian Minister for Sport, Recreation and Veteran Affairs visited Westminster City Council's Little Venice Sports Centre in London as part of a fact-finding trip to the UK on best practices in community sport. 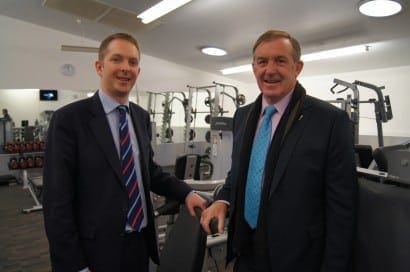 AN AUSTRALIAN politician flew half-way around the world to see how a Westminster sports centre has helped a community get more active and play more sport.

Hugh Delahunty visited Westminster City Council’s Little Venice Sports Centre, in Crompton Street, as part of a fact-finding trip to the UK. The Minister for Sport, Recreation and Veteran Affairs for Victoria was learning how well-designed and attractive facilities encourage people to play sport more often.

Sport England, which invested £320,000 in the £4.5 million facility, put Little Venice forward as an example of best practice on how a community sports facility can operate.

Mr Delahunty was given a tour of the state-of-the-art facilities by Cllr Steve Summers, who represents London’s own Victoria in Westminster’s Vincent Square ward.

After the pair took the chance to try out the basketball court first-hand, Cllr Summers, Westminster City Council’s cabinet member for the community, showed Mr Delahunty around the sports hall and the recently refurbished gymnasium.

They also met with leisure centre staff and discussed how sports centres can be positioned at the heart of local communities.

“The first-class facilities that we have at Little Venice are the perfect example of how a sports centre can become the focal point of a community.

“The centre has proved to be extremely popular since opening and we expect visitor numbers to continue to rise from 100,000 visits two years ago to as much as 150,000 this year.

“It was great to share some of the secrets behind the centre’s success, as well as talk about how we can provide a first-class service without laying a heavy burden on the taxpayer.”

“It was great to see a multi-use facility with a strong community focus being run by a hard working enthusiastic team in a cost effective way.

“The centre is a great asset for the communities of Westminster.”