Budding humanitarian and University of Western Australia (UWA) graduate David Sherwood, 21, has already co-founded an education support group for primary school children and can now add a Rhodes scholarship to his list of accolades. 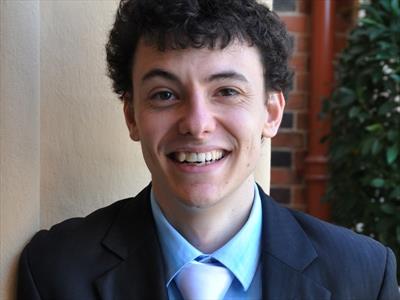 BUDDING humanitarian and University of Western Australia (UWA) graduate David Sherwood, 21, has already co-founded an education support group for primary school children and can now add a Rhodes scholarship to his list of accolades.

Mr Sherwood was chosen on Friday from the final five WA candidates for the prestigious scholarship, which enables nine outstanding Australian students to complete postgraduate studies at the University of Oxford.

He will be one of 83 international students in the Rhodes Class of 2013 and plans to complete the philosophy, politics and economics course.

While he will graduate from UWA with a bachelor in advanced science and honours in chemistry, Mr Sherwood says his passion lies in education reform.

“We currently have 140 tutors about to go out into the country and they spend about a week [there],” Mr Sherwood said.

The volunteer tutors are students from Edith Cowan University, many of whom are studying education.

“They get about three kids each, primary school kids, and they do one-on-one maths and English with them.

“They’re there from 9am to 3pm just tutoring the whole time.

“Kids love it, the teachers love it.”

Mr Sherwood was born in Dardanup, just outside of Bunbury in WA’s southwest, and grew up on a family farm that his parents started when they put their jobs as lecturers on hold to have children.

He graduated dux of Bunbury Senior High School in 2008 with a tertiary entrance score in the top one per cent of the state and was accepted into the elite UWA advanced science program with a Fogarty Foundation scholarship.

Mr Sherwood says has not ruled out pursuing a career in federal politics, which would see him following in the footsteps of previous Australian Rhodes scholars such as former prime minister Bob Hawke, opposition leader Tony Abbott and Australian ambassador to the US Kim Beazley.

“As long as I’m helping the Australian public, I’m going to be happy with what I do.” – AAP