Julia Gillard has contrasted proposed media law changes by the conservative government in Britain with Tony Abbott’s opposition to reforms in Australia. 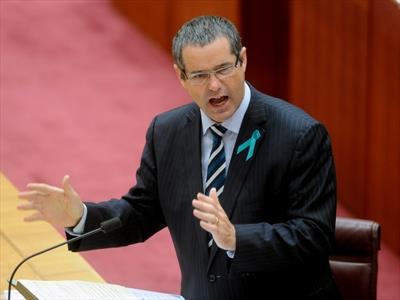 PRIME Minister Julia Gillard has accused the coalition of hypocrisy in opposing media reforms while their UK counterparts are voting in much tougher laws.

The six media law bills – due to be debated in the lower house on Tuesday – include a public interest media advocate to oversee press council standards and big media mergers, as well as items affecting broadcasters.

The opposition will support two of the bills, which deliver cheaper television licence fees to networks in exchange for more local content and extend the ABC and SBS charters to online media.

But Labor needs the support of the Greens and independents to get the remaining bills past both houses by its self-imposed deadline of Thursday.

Ms Gillard told parliament the Cameron government in the UK had introduced much tougher restrictions on the media following the phone hacking scandal that engulfed some News International publications.

The UK model includes upfront apologies, million-pound fines, a standards code and an arbitration service that is free for victims and must make timely decisions.

Ms Gillard said the only party that did not recognise there was debate in democracies around the world about press standards was the Tony Abbott-led federal opposition.

“They will stand condemned for their hypocrisy,” she told parliament during question time.

But Ms Gillard acknowledged there had been a bit of “stress” in the handling of the government’s own process, and a “fast and furious” debate had ensued.

“Getting the big and important public policy reforms done is never easy,” she said, particularly something as contested as media reform.

The process has been criticised for being rushed, impairing scrutiny of the bills.

Mr Crean agreed the process “could have been handled better” but defended the reform objective.

During the caucus meeting, ALP backbencher Janelle Saffin got no answer when she asked Ms Gillard if the media bills would be taken to the election as party policy.

Chief government whip Joel Fitzgibbon then entered into the debate, arguing the government hadn’t done enough to stand by the “victims” of media reportage and privacy intrusions.

On Tuesday afternoon, the government was still short of the votes needed to get all the bills through the lower house.

Meanwhile, a Senate inquiry heard from the architect of some of the reforms, former federal court judge Ray Finkelstein.

Mr Finkelstein said the only imposition on press freedom of the bills would be a requirement to correct, retract or apologise for incorrect stories. –AAP