The Sun to take up News of the World slack?

News International spokeswoman says speculation that Murdoch tabloid The Sun will become a seven day publication are “not true… at the moment” while former NOTW editor and former press secretary for David Cameron, faces arrest. 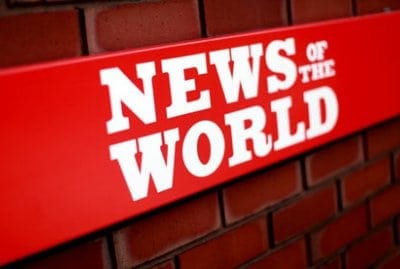 NEWS International spokeswoman Daisy Dunlop hardly killed off rumours that The Sun, the tabloid which is published from Monday to Saturday, would become a seven-day operation to pick up the slack for the company following the closure of News of the World.

“It’s not true at the moment,” she said.

Britain’s ugly phone-hacking scandal has took a shock twist today by claiming the scalp of the 168-year-old News of the World newspaper.

Rupert Murdoch’s News International stunned Britain by announcing the best-selling tabloid would be published for the last time on Sunday.

The decision followed an extraordinary three days of revelations about intrusive phone hacking and alleged pay-offs to police from the newspaper.

The tabloid is renowned for using dubious, and sometimes illegal, techniques to titillate its readers with stories about the personal lives of celebrities and politicians.

However the newspaper crossed the line in the eyes of the public when it was revealed this week that it had tapped into the phone messages of murdered schoolgirl Milly Dowler and relatives of slain soldiers and 2005 London bombing victims.

Murdoch’s son, James, who heads the European operations for News International, said the newspaper would publish its final edition without ads and with money raised from sales going to charity.

The decision to shut down the newspaper followed the majority of its advertisers pulling their business in protest at the privacy intrusions.

News International said shutting down the News of the World would cost about 200 tabloid jobs with journalists and production staff in tears following the announcement.

Some have suggested the move has been orchestrated by Rupert Murdoch to bolster his company’s chances of being able to fully take over broadcaster BSkyB.

The decision to scrap the newspaper came only hours after the British government decided to put off until September a decision on whether to allow Murdoch to purchase the rest of pay-TV giant BSkyB, the deal estimated at around STG12 billion ($A18 billion).

She was the editor in charge when phone-tapping practices were used but has somehow been spared from the knife.

The stench from the story has major implications for Prime Minister David Cameron.

Cameron is a close friend of Brooks and employed former News of the World editor Andy Coulson as a spin doctor last year.

Coulson was in charge at the newspaper when royal editor Clive Goodman and private investigator Glenn Mulcaire were jailed for phone hacking.

Coulson quit as editor in the wake of the controversy and stepped down from his Downing Street role in January, two months after being interviewed by police as the scandal resurfaced.

Reports are emerging tonight that Andy Coulson may face arrest tomorrow over the affair.

Cameron’s office said it had no role or involvement in the decision to close the News of the World and that no pressure was applied to News International or James Murdoch.

“What matters is that all wrongdoing is exposed and those responsible for these appalling acts are brought to justice,” said a statement from Downing Street.

“As the Prime Minister has made clear, he is committed to establishing rigorous public inquiries to make sure this never happens in our country again.”

“The one person that now seems to be staying in her job is the chief executive of News International, Rebekah Brooks, who was editor at the time that Milly Dowler’s phone was hacked,” he said.

“I don’t think News International can hope to move on and deal with these issues while she remains in her post.

“I hope the Prime Minister starts speaking out on these issues, instead of hiding away.”

Police are now examining 4000 names of people who may have been targeted by the paper.

The closure was viewed as a cynical commercial decision by the father of a July 7 victim.

Graham Foulkes, whose 22-year-old son, David, was one of the 52 people killed in 2005, was among those warned by a senior detective that they featured on a list of potential hacking victims.

He said the decision to close the newspaper was a “particularly nasty piece of work by a nasty man”.

“As I’ve learned more about it, it looks more and more like a commercial decision he has made, a cynical decision,” he said.

The News of the World, which sells close to three million copies a week, has admitted it hacked into the mobile phone voicemails of politicians, celebrities and royal aides.

James Murdoch said if the allegations were true, “it was inhuman and has no place in our company”.

“Wrongdoers turned a good newsroom bad,” he said, “and this was not fully understood or adequately pursued.”