The Aussie peace protester of London 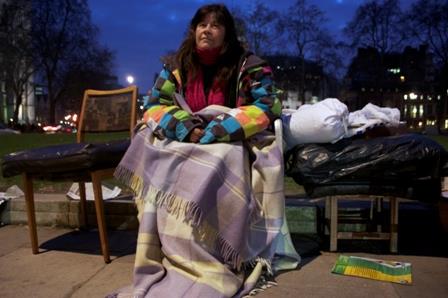 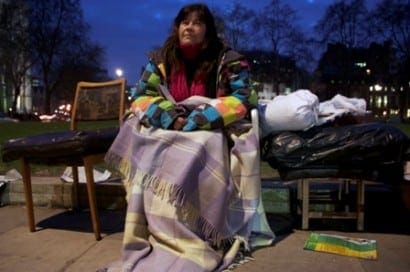 Words and pictures by Rebekka Hodges
ALL around me the low and slowly changing sounds of bells resonate, passingthrough the walls of Parliament Square. It is 6:00pm and the sun is fading into the night sky, casting a golden hue on everything it touches. Although the days are becoming longer and warmer, the evenings remind us that summer is still beyond our grasp.

Her chocolate brown hair cascades over a brightly checkered jacket and falls to rest on a hand-knitted pink scarf.

Finishing her smoke, she sits down on a plastic armchair and wraps herself in a thin cotton blanket. This has been her bed for the last 40 odd evenings, thanks to last year’s introduction of the Police Reform and Social Responsibility Act ss 143(2)(b), which prohibits the erection of or maintaining a structure in the controlled area of Parliament Square that is designed, or adapted, (solely or mainly) to the purpose of facilitating staying in the area.

She has a sleeping bag too, although it is still rolled up, hiding under a tarpaulin because the act also bans any equipment designed for sleeping overnight in the area. I ask to take a look, expecting to see some over-sized and hence banned object, and she meets my eye, slightly tilting her head as if to question my sanity. “Don’t you think I would have it out if it was allowed?” she asks. “They’re just waiting for me to do the wrong thing so they can lock me up again. Any excuse to get rid of this old ‘eyesore’ in time for the Olympics.” Behind her, over the other side of the square, a police van lurks, awaiting its prey like a vulture.

Doing hard time for peace
Melbourne—born Barbara ‘Babs’ Tucker began her peace campaign in Parliament Square six years ago, in what is now over a decade-long campaign founded by the late Brian Haw. Since the beginning, she has been arrested 44 times and jailed twice.

“The first time that I was arrested was in 2006. I had a pink sequined banner that said ‘Peace Love and Justice for All’. 10 police officers marched in here on Easter Sunday and handcuffed me. It seems as though ‘peace’ has become a dirty word because they are making too much money out of war. In the six years I have been campaigning, it has never mattered if we’ve had one banner, a whole display or if we spoke on a loud speaker. It doesn’t matter how we campaign, we just keep getting arrested.”

As we are speaking, a young gentleman pulls up beside us on his bicycle and looks around wearily. “Um, can I speak with you for a moment Babs?” he asks. Lifting herself from the seat, she walks out of earshot and the pair exchange words, seemingly in silence. Moments later she returns with a handful of fruit. “It’s like a little community around here,” she beams, holding up her gift beneath the light of the street lamp. “People are always worried about us. Even the homeless people have been stopping by recently to check up on us. They feel so sorry for us, because even they have tents.” 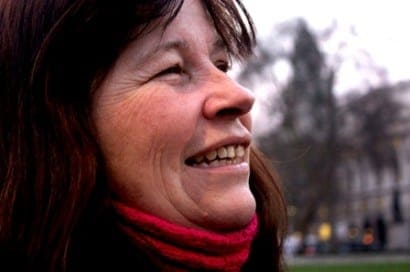 The world that ‘doesn’t exist’
“I’m living in a world that most people don’t even know exists. Coming from Australia, and even England, we’re raised with this idea that we live in a democratic society and that we have access to freedom of speech, but here we are, our message so simple – ‘stop killing’, and yet we are arrested for it. A lot of people really have no idea what goes on here.”

“I mean look at the young people in Egypt. They laid down their lives, fighting for justice. And I remember last year as the backdrop to that, here in London they were trying to get rid of us for the Royal Wedding. A wedding! As if it were the most important thing in the world. We had the world’s press here trying to get us to say something disparaging about the Queen and they were shoving cameras in our faces, asking us our opinions in the hope of getting us arrested and out of public view. I mean we are an embarrassment to them. Here we are peacefully campaigning for our beliefs, and if you think about it, the beliefs of a lot of people, and they don’t like it because we aren’t playing their game. I think they would love us to have machine guns and they’d love us to be insurgents. We are ‘criminals’ anyway and these are the things they know how to deal with; violence they know how to deal with.”

Babs stops and takes in a deep breath of the cool night air.

“We, the campaigners, we can’t be Brian, because he was a one off, he really was, but we can still carry on the job that needs doing. His message was – it shouldn’t be one person. If one million people took one week out of their four weeks’ annual holiday, it’s not about losing your job, it’s not about going on strike, it’s about people coming together, and that would force the government to make concessions.”

‘Happy little families’
By now, the streets have begun to clear, people heading underground towards the tube to escape the chill. All that stands between the Thames and ourselves; ironically the only barrier to protect us against the breeze sweeping off the water is Parliament House, the home of the government. Babs looks up at Big Ben with those big, all-knowing eyes. “I won’t miss that thing when I’m gone,” she says. “They want London to be this big happy family for the Olympics. I know they’ll do everything in their power to lock us up during the Games.” She talks as if her future has already been decided.

“But, we’ll just keep coming back. It’s a question of who’s frightened of whom. If they lock us up, it’s because they’re worried about what we’re saying. We’ve been dragged through every court in the country and we’re still here, which just goes to show that you can write things down on a piece of paper but it doesn’t make it true. It’s the process; they try to wear you down through various mends; that’s how they play the game. And I get the game, but it’s so silly; they’re spending so much time trying to maintain a system that’s of no use to anyone.

She fixes me with those intense but tired eyes.

“It was actually my ex-mother in law who said that you have to do the extreme things to make any change at all. One wouldn’t normally choose to do something like this, but someone has to.” 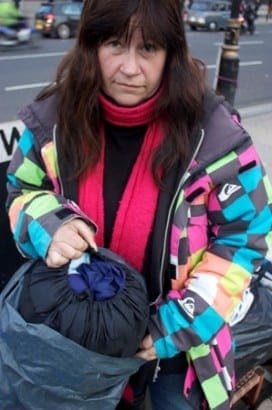 Not normal life
Considering the amount of time Babs has spent living this lifestyle she is motivationally upbeat and somehow radiant. “It’s physically and mentally demanding because this isn’t my normal life. I’d never had any confrontation with the police or political authorities prior to my being here and I still see my identity outside of what I am doing. But, I’m very old, so in the whole context of my life, six years is not a big deal.”

“I was a mum before this. I have two grown up sons. I was a chair of government at school, ran a childcare and helped out people in their homes with health care. My life was so normal. But, where are we as adults in the year 2012 when we let our young people go to wars and kill people for a job? It just blows my mind. I have no wish to die here on the pavement, but I’ll lay down my life here before ever watching my sons go and fight a war. I’m effectively doing what any mother would do for their kids.”

Having resumed her position on the tacky plastic chair, Babs looks around noting the sudden lack of human presence. I wonder if she too imagines them sitting around inside their homes with steaming cups of tea. A light whistling sound whips between the passages created by the overhanging buildings within the square. After saying our farewells, I turn around for one final wave before crossing the street. Wrapped in her blanket, her eyes are already closed and her pursed lips are slightly upturned as if smiling. Despite the obstacles in this never ending pursuit for peace, Babs can rest knowing that she has fought as hard as possible for her beliefs.

Do you agree with what Barbara Tucker is campaigning for? Is the government right in trying to remove protesters like Babs? Comment below: