Thank you card for DisabilityCare moves Gillard to tears

A postcard from two youths with disabilities has brought Prime Minister Julia Gillard to tears as she introduced disability care legislation. 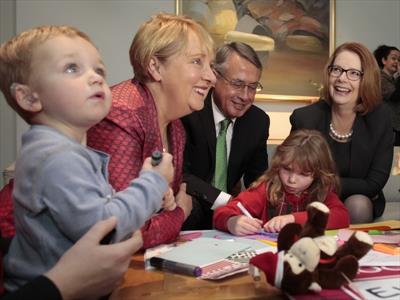 Sandi and Sophie may not be household names but their hopes and dreams have reduced a prime minister to tears.

Julia Gillard on Wednesday introduced to parliament a bill to hike the Medicare levy to pay for the new national disability insurance scheme.

Recalling a thankyou card from 12-year-old Sophie, who has Down Syndrome, and 17-year-old Sandi, who is in a wheelchair, the prime minister said DisabilityCare Australia would let them realise their dreams for greater opportunity.

“There will be no more ‘in principle’ and no more ‘when circumstances permit’,” Ms Gillard said, fighting back tears.

“DisabilityCare starts in seven weeks time and there will be no turning back.”

The levy boost from 1.5 per cent to two per cent is expected to raise $20.4 billion over four years.

“For everyone who thinks, ‘It couldn’t happen to me, could it?’ this bill brings peace of mind,” Ms Gillard said.

“It brings the knowledge that a scheme as well-designed and stably funded as Medicare will be here when you need it.”

The introduction of the draft laws came a day after Treasurer Wayne Swan delivered his sixth budget, which included a 10-year funding pathway for the disability care scheme.

The coalition has pledged to support the levy rise but queries where the government will find the remainder of the funding.

Every state and territory apart from Western Australia has signed up to the scheme.

The opposition supported the unusual move to pass the legislation through the lower house on the same day as its introduction.

“We view the Medicare levy increase as only a temporary measure until the budget has been repaired and is in strong surplus,” opposition spokesman for human services Kevin Andrews told parliament.

“We don’t like tax increases but we don’t think that Australians with a disability should miss out on a better deal due to poor decisions by a bad government.”

The legislation was passed by the House of Representatives and will now go to the Senate.

Speaking later on Network Ten, Ms Gillard said she didn’t “really expect” to get so emotional at the start of the speech.

“I got to a section of the speech where I was telling some stories about young people with disabilities that I’ve met around the country, just thinking about them, and thinking about so many Australians I’ve met with disability and the parents and the things that they’ve said to me, I did get really emotional about it,” she told The Project.

“I think all of us are moved in these jobs when you get the opportunity to actually deliver something of such significance to people who deserve it and who are in need,” Senator Wong told ABC television.

Senator Wong questioned the level of scrutiny being given to the prime minister’s tears.

“Did we analyse Bob Hawke’s tears as much as these seem to be analysed?” she asked. – AAP