Embattled politician Ted Baillieu has resigned from his position as Victoria’s premier in a shock announcement following the resignation of government MP Geoff Shaw, and increasing concern over his role in the police tapes crisis that led to Baillieu being forced to refer his own chief of staff to an anti-corruption committee earlier this week. 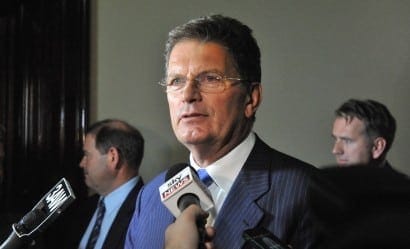 EMBATTLED politician Ted Baillieu has resigned from his position as Victoria’s premier in a shock announcement following the resignation of government MP Geoff Shaw, and increasing concern over his role in the police tapes crisis that led to Baillieu being forced to refer his own chief of staff to an anti-corruption committee earlier this week.

Baillieu was emotional in announcing his resignation, thanking his staff and family for their support during his time as the state’s leader. He confirmed that he would not be resigning as a member of parliament, and would be continuing to serve his electorate of Hawthorn in the capacity of a backbencher.

Former Minister for Ports, Regional Cities, Racing and Major Projects Denis Napthine was elected by government MP’s to succeed Baillieu as the state premier, effective immediately. Napthine will lead the Coalition government with a one-seat majority, with 44 Coalition MPs to the Labor Party’s 43. This has triggered speculation as to whether Napthine would form a minority government or call an election to resolve the instability caused by a one-seat majority.

The Victorian wing of the Liberal Party called a snap meeting at Parliament House on Wednesday night with media told that Baillieu would make a statement immediately after the meeting’s conclusion. Baillieu had said earlier in the day that Shaw’s resignation from the Liberal Party would not trigger a change of government and that the coalition would continue to govern Victoria.

Baillieu said: “I can tell you as I am sure you are aware Geoff Shaw has resigned as a member or the parliamentary Liberal party. That means that he will, I understand, I haven’t spoken to him but others have, that he will sit on the cross benches. I’m not going to get into the details of what might or might not happen, what I can tell you is that we are committed, we have a very strong forthcoming agenda and we have been able to govern with a narrow margin and I believe we can continue to govern and we will continue to govern.”

Victorian Opposition Leader Daniel Andrews said: “”There is no one in the Baillieu Government today thinking about jobs, or hospitals or transport or schools, this is a government that has stopped governing. The Premier is not so much running a government as running a complete and utter circus, it’d be funny if it weren’t so serious.”

Shaw’s resignation was a blow to Baillieu’s government in a week that had already seen the Victorian Premier’s leadership severely tested by allegations that his chief of staff Tony Nutt and Liberal Party chief Damian Mantach were recorded by police organising a secret payout to a former political adviser. Baillieu refused to stand-down Nutt, however he referred the matter to the Independent Broad-based Anti-Corruption Commission (IBAC).

Baillieu became Premier of Victoria in 2010 after defeating the long-serving Labor government led by John Brumby with a slim margin. He was first elected Member for Hawthorn in 1999, and had served as Leader of the Opposition for four years before assuming power.