Scottish experts in 3D scanning and visualisation, the Scottish Ten project, are set to apply their skills to digitally recording one of Australia’s most iconic buildings — the Sydney Opera House. 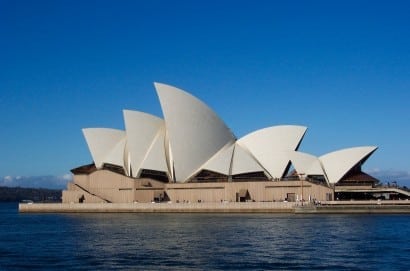 A cutting edge Scottish project seeking to achieve digital documentation of UNESCO World Heritage Sites is set to head Down Under, with the Sydney Opera House joining a list previously focussed on historic castles, tombs and Neolithic settlements.

Having already mapped the presidential heads at Mount Rushmore in the United States, and Rani Ki Vav, the Queen’s Stepwell in India, the Scottish Ten are now looking to record something a bit more modern but nonetheless equally iconic.

The announcement was made by Cabinet Secretary for Culture and External Affairs, Fiona Hyslop at DigiDoc 2012, an international digital documentation conference in Edinburgh. The conference, hosted to explore advanced forms of digital media and data, was attended by representatives from Australia, including Greg McTaggart, director of building development and maintenance at Sydney Opera House, and Bob Leece, Opera House Trustee.

Ms Hyslop acknowledged the Opera House as “a masterpiece of architecture and engineering” that would be a fascinating addition to the Scottish Ten project, further pushing the team’s skills and experience in contrast to the castles, mills and sculptures that had come before it.

“This will be the most detailed digital recording of the Opera House ever attempted. It will present entirely new challenges for the Scottish Ten team, who have already completed projects at vast and complex sites in the USA and India, and will soon visit China.

“The Scottish Ten project will provide us and the Sydney Opera House Trust with extraordinary insights into one of our most well known buildings, and provide invaluable information and perhaps a new way of looking at the place.”

Laser scanning accurately records the 3D surface of objects in a digital form by directing a laser light from a static point towards the object. The laser beam scans the surface with 10,000s of points per second, with the returning, reflected laser light used to compute the distance to surface of each point.  The resulting data can be processed to produce models, photo-realistic surfaces or outputs in other forms.

The amount of data collected in this process can be immense — recent scans of some sites were made up of 8 billion individual points, equally terabytes of data. With its unique shape and unusual lines, it is likely the Sydney Opera House will be a true test of this ground-breaking technology.