Another incident of racism on Australian public transport has occurred, with mobile phone footage showing a man racially abusing a middle-aged couple of Asian appearance on a Sydney bus. 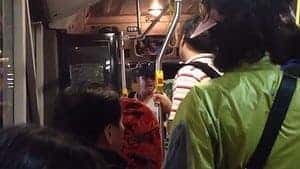 MOBILE phone footage has emerged of a man engaging in racist abuse towards a middle-aged couple of Asian appearance on a Sydney bus. Following the posting of the video to YouTube, the uploader of the clip has been subjected to further racist and sexist abuse.

The clip shows a Caucasian male swearing and verbally abusing two people of Korean appearance on the 470 bus at Town Hall in Sydney at 7.30pm on Easter Saturday.

A woman known as Heidi, who witnessed the attack and posted the clip, told Fairfax Media the man said: “Do you f**king speak English? Why did you come to Australia?”

It is alleged that he continued: “Japanese c**ts”, “f**king bastards” and “get out of this country”.

Yong Wang, a Chinese-Australian man who also tried to intervene, was told by fellow passengers to “shush” and not to challenge the abuser.

Heidi said: “This incident revealed a very ugly side of Australian culture.”

Heidi, a 30-year-old office worker of Chinese descent, decided to start filming the incident as she did not know what else to do. She asked the abusive male to get off the bus, however was ignored. No other fellow passengers offered help or support.

“I am deeply shocked and offended that we tolerate this sort of rampant racism in public,” she said.

The incident comes only months after ABC newsreader Jeremy Fernandez was subjected to racial abuse on a Sydney bus in front of his daughter.

Another incident in Melbourne last year attracted international headlines after a French woman was abused for singing in French on public transport.

The posting of the clip onto YouTube has attracted abusive comments towards Heidi and further racist diatribes.