The Australian men's swimming 4x100m relay team have faced the media today over allegations of bad behaviour at the 2012 London Olympics. Four of the six Aussie swim team members have admitted to taking Stilnox in a 'bonding session'.

by Paul Bleakley
in News, Sport 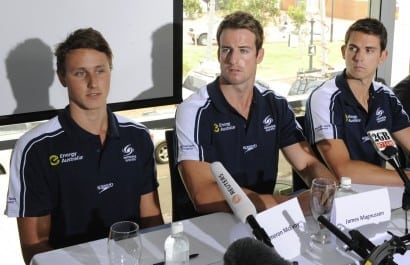 THE six members of the Australian men’s swimming 4x100m relay team faced the media today after allegations by silver medallist Jade Neilson surfaced overnight claiming that they were the instigators of the bad behaviour referenced in this week’s report into the conduct of swimmers during the 2012 London Olympics.

Neilson claimed that the relay team consisting of Eamon Sullivan, James Magnusson, Matthew Targett, James Roberts, Cameron McEvoy and Tommaso D’Osogna had been involved in inappropriate conduct while at a swimming training camp in Manchester shortly before the Olympics began. She said that Magnusson, Roberts and McEvoy had woken members of the Australian swimming team with late night phone calls and disruptive door knocking pranks.

The swimmers spoke to the media alongside Swimming Australia president Barclay Nettlefold and swimmer’s representative ex-Olympic gold medallist Daniel Kowalski. In a statement read by Kowalski, they admitted to having participated in a team bonding evening that involved inappropriate behaviour and the consumption of banned substance Stilnox.

The statement read: “At one point some team members left the room and did knock on the doors of our team but at no time did we think it was anything but childish behaviour. As proud members of the Australian swimming team, we acknowledge that by our actions, we have let ourselves down.

“At one point some team members left the room and decided to make prank calls to random rooms. At no time did we ever deal with anything more than childish behaviour. There was definitely nothing untoward in our actions.”

Four of the six swimmers admitted to taking Stilnox as a part of the bonding ritual after an earlier discussion in which veteran Olympians Sullivan and Targett reflected upon “initiation” rituals that they had been a part of at their first Olympic Games. Roberts and D’Osogna claim that they did not participate in taking Stilnox, however admitted to playing an active role in the incidents that occurred during the evening of team bonding.

Sullivan said that the team disputed many of the claims that had made against them, insisting that every member of the 4x100m relay team had been in bed by 10.30pm on the night of the bonding session. He said that he regretted his poor decisions and would co-operate fully with the forthcoming independent inquiry into their actions.

Sullivan said: “”I’m deeply sorry that my actions in not taking more leadership on the night has brought us to this point. It did cross my mind that it was a bad idea, and for that I am truly sorry.”

The claim that all members of the team were in bed by 10.30pm is disputed by other members of the Australian squad, with silver-medallist Emily Seebohm claiming that she too had received late night phone calls long after the men had claimed to be in bed.

Seebohm also told Nine News that she had made head coach Leigh Nugent aware of the incident on the following morning, and that Nugent had claimed that it “wouldn’t have been” the men’s relay team that were involved. Nugent said this week that he was aware that an incident had occurred during the Manchester training camp, however was unaware that banned substances were involved.

The relay team also rejected claims made by Olympian Leisel Jones earlier this week that they had been involved in bullying a younger member of the Australian swimming team, hitting him around the head and calling him fat. Sullivan said that this was a “false statement” and that no such incident had occurred.

The swimmers will now face a Swimming Australia integrity inquiry which will have the power to impose sanctions and fines on athletes for bad behaviour or otherwise breaking the sport’s code of conduct.