Former Labor leader Simon Crean has assured voters that Julia Gillard will lead the Labor party to the next election, despite Kevin Rudd accidentally referring to himself as PM. 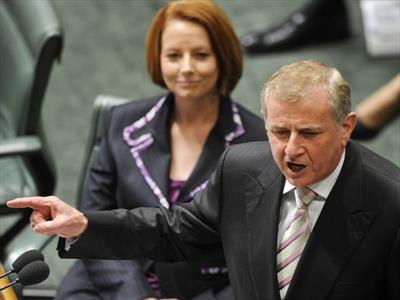 FORMER Labor leader Simon Crean has assured voters that Julia Gillard will lead the Labor party to the next election, despite Kevin Rudd accidentally referring to himself as PM.

“There is no challenge, there is no vacancy,” the regional Australia minister told AAP on Tuesday.

“Julia, as Prime Minister, will lead us to the next election.”

Mr Crean, who also faced dire opinion polls when he was toppled as leader in 2003, said Ms Gillard was doing “an excellent job in very difficult circumstances”.

“One’s always got to get a perspective with polls, there is a difference between popularity,” he said.

“The prime minister not only has my support, I have consistently supported the leader.”

Earlier on Tuesday Mr Rudd told ABC radio that he was “a very happy little vegemite being prime minister … being foreign minister of Australia”.

He then went on to say “you’ve caught me getting off the plane, jet lag”.

When asked about Mr Rudd’s explanation for the gaffe Mr Crean responded: “I believe all the things that my colleagues say.”

A quarterly Newspoll study showed Labor would lose half of its seats in NSW – including four held by ministers – if a federal election was held now.