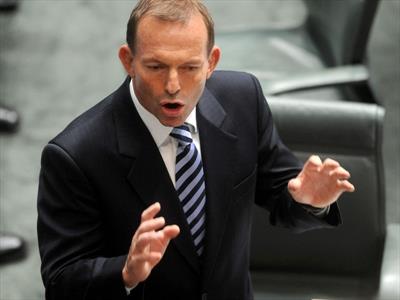 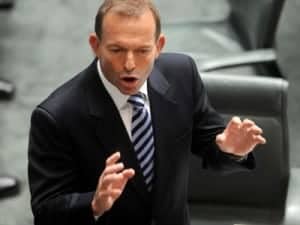 The call came as 200 protesters gathered on the lawns outside the Parliament in Canberra for an anti-carbon tax rally just two days before the Queensland poll.

As parliament prepared for a six-week break, Mr Abbott launched the coalition’s 50th attempt to suspend standing orders to force the prime minister to apologise for bringing in the carbon tax, after she had said she wouldn’t.

The Queensland election would be a referendum on the tax and its part in pushing up power prices, Mr Abbott told the lower house.

Mr Abbott said Queensland’s 2.7 million voters would be passing judgment on the tax on Saturday as well as on Labor Premier Anna Bligh, who is expected to lose to the Liberal National Party’s Campbell Newman.

“Their baseball bats are not only there for Anna Bligh – they are there for the prime minister,” Mr Abbott said.

The opposition motion was lost, after Ms Gillard pointed to the compensation households will get when the tax comes in on 1 July, saying Mr Abbott had failed to put working families’ interests ahead of his own political interest.

Outside the house, Queensland mining magnate Clive Palmer – who has donated $4 million to the coalition in recent years – called on Ms Gillard to step down as prime minister for misleading the public over the carbon tax.

“She should no longer be the leader of the Australian government,” Mr Palmer told the anti-carbon tax protesters via a speaker phone.

Mr Palmer urged the crowd to “dig deeper” in their efforts to help topple the carbon tax, which he is considering challenging in the High Court.

“What you are doing it for is not for me, but for you and me together, for our country, for our children,” he said.

Earlier in parliament, Mr Abbott was embarrassed when coalition MP Darren Chester, who had been suspended from the chamber for an hour for interjecting, decided to sit in the public gallery with a group of young people.

When his presence in the gallery was noticed, Mr Chester was suspended for an entire day for breaching standing orders.

With the 2012/13 federal budget due to be delivered after the six-week break on 8 May, the opposition also focused their questions on Labor’s economic management.

Opposition finance spokesman Andrew Robb asked why the government was spending $145,000 to study “sleeping snails”, while Nationals Leader Warren Truss asked why the $1 billion budget of an energy security fund would be slashed to $1 million in 2012 and returned to $1 billion in 2013.

Ms Gillard told parliament the government was committed to “prudent budget management” and delivering a surplus in 2012/13.

“You can rely on the government to run the budget in the interests of working families, not a privileged few billionaires,” she said.