Tropical sea cucumbers and their faeces could save coral reefs from the harmful impacts of climate change, scientists have found. 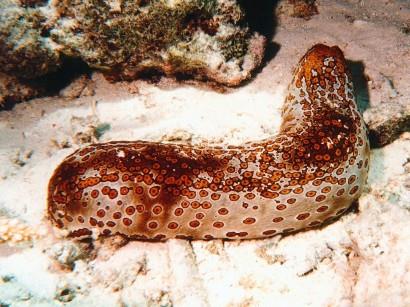 TROPICAL sea cucumbers and their faeces could save coral reefs from the harmful impacts of climate change, scientists have found.

Scientists at One Tree Island, the University of Sydney’s research station on the Great Barrier Reef, say sea cucumbers reduce the impact of ocean acidification on coral growth.

“When they ingest sand, the natural digestive processes in the sea cucumber’s gut increases the pH levels of the water on the reef where they defecate,” said Tree Island director professor Maria Byrne.

This works to counter the negative effects of ocean acidification.

One of the by-products when sea cucumbers digest sand is also calcium carbonate (CaCO3), which is a key component of coral.

“To survive, coral reefs must accumulate CaCO3 at a rate greater than or equal to the CaCO3 that is eroded from the reef,” said Prof Byrne.

“The research at One Tree Island showed that in a healthy reef, dissolution of calcium carbonate sediment by sea cucumbers and other bioeroders appears to be an important component of the natural calcium carbonate turnover.”

Sea cucumbers are among the largest invertebrates found on tropical reefs.

Some 30 species are commercially harvested by the fishery industry along the Great Barrier Reef and throughout the tropics.

“We urgently need to understand the impact of removing sea cucumbers and other invertebrates on reef health and resilience at a time when reefs face an uncertain future,” Prof Byrne said.  – AAP