Media mogul Rupert Murdoch has been attacked in London during the British MPs inquiry into the phone hacking scandal that has engulfed News International. 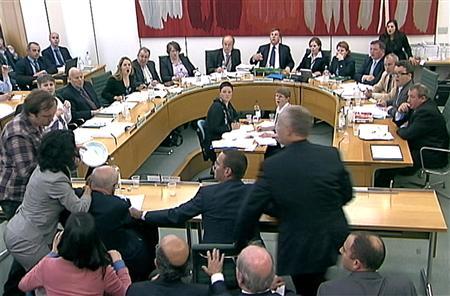 MEDIA mogul Rupert Murdoch has been attacked in London during the British MPs inquiry into the phone hacking scandal that has engulfed News International.

Speaking with his son James Murdoch in an open session in front of the culture, media and sport committee hearing, Murdoch Snr was accosted from behind by a man brandishing a plate filled with shaving foam.

The Murdoch entourage quickly jumped to the defence of the 80-year-old Australian born magnate and Murdoch Snr’s wife, Wendi Deng, assaulted the would-be attacker with a vicious right hook. 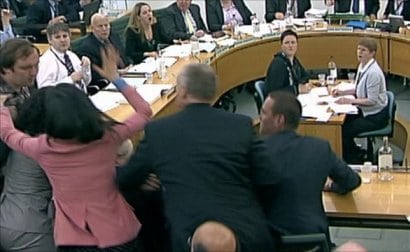 The man, UK ‘comedian and activist’ Jonnie Marbles, tweeted on Twitter just before the stunt: “It is a far better thing that I do now than I have ever done before #splat” and was later arrested and charged.

The sitting was adjourned for 10 minutes before resuming.

Murdoch Snr claims he was should not be held responsible for the phone hacking scandal that has threatened to cripple his media empire.