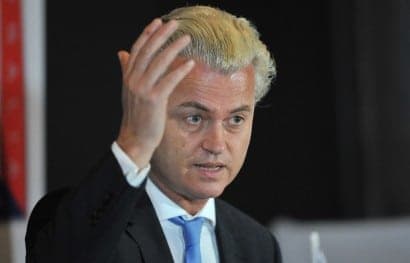 Over fifty officers were assigned to maintain order at Wilders’ speech in the north Melbourne suburb of Somerton, in which the Dutch MP labelled Islam “a dangerous and totalitarian ideology” and called upon Australians to draw upon the ANZAC spirit of courage to combat the growing influence of Islam in Australian society.

Wilders said: “I am here to warn Australia, learn from us, learn from our mistake, learn from the European lessons. The more Islam you get in your society the less civilised it becomes and the less free it will be. The old ANZAC spirit that helped keep Europe free in the past can and will keep you free in the future. Be as brave as your fathers and you will be free.”

Wilders is a polarising figure in European politics, notorious for his outspoken views against the ‘Islamificiation’ of Western culture. He has been banned by several European nations, including the United Kingdom, in the belief that his rhetoric may constitute an incitement to racial hatred and discrimination.

Protesters from groups including the Socialist Alliance attempted to prevent guests entering the $66-a-head speech, ripping up their tickets and blocking the entry until forced to move by police. There were reports that one middle-aged guest was pushed to the ground while trying to bypass the protester’s blockade while one of the protesters claimed to have been attacked by a guest that he referred to as “one of the fascist cohort”.

Wilders used his speech, organised by Australia’s Q Society, to encourage Australians to be “vigilant” against the trend of mass Muslim migration that he claims has had a detrimental impact on European culture. He claimed that a dangerous subculture existed beneath Europe’s glossy veneer that came as the direct result of Muslim immigration.

Wilders said: “Islam is not just a religion, as so many people mistakenly think, but a dangerous ideology. Australian tourists visiting our major cities in Europe can still see the postcard views … but if they are not careful and walk a few miles in the wrong direction they risk entering a dangerous Muslim ghetto.”

Islamic Council of Victoria executive member Mohamad Tabbaa said that the racist views propagated by Wilders were outdated and that successful multicultural societies like Australia were built on stronger foundations such as unity and respect.

Tabbaa said: “Respect and co-operation are the conditions of a confident and vibrant society – they lay the foundations for a bright future – for which all members of society can thrive and reach their utmost potential. Hate and suspicion on the other hand are a sure way to destroy the fabric of societies and lead instead to division and disharmony.”

Tan said: “Geert Wilders can come and go – he can express his views. What we say is that we do not agree with him and we certainly do not agree with anybody who seeks to create and incite disharmony in society. We have come out spontaneously to say we don’t want that and we don’t need them, we are able on our own to achieve the kind of society that’s been built over a long period of time, through a lot of effort by individuals, organisations to create what we have got.”

The Dutch politician’s speech, widely broadcasted on social media, also made several inflammatory comments about the central figure of Islamic scripture: the Prophet Mohammed. Wilders said that the prophet was a “murderer” and a “pedophile” that had founded a religion based on a 7th Century reign of terror in the Middle East.

Wilders said: “We have to be able to talk in a free society about the character of Mohammed. Mohammed was a warlord, a terrorist, a pedophile, and I would not say that if not today 1.5 billion people believe that Mohammed is the best example to follow.”

Wilders is scheduled to speak in Perth and Sydney at the end of this month, however the Q Society claimed that around thirty venues had cancelled the Dutch MP’s speaking engagements.