Prime Minister Julia Gillard has visited bushfire-stricken parts of north-western NSW and says she is overwhelmed by the stories of bravery. 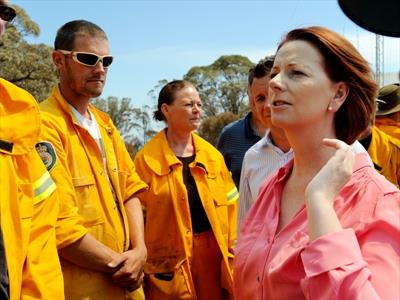 PRIME Minister Julia Gillard has visited fire-ravaged northern NSW to hear first-hand stories of locals who saw, fought and escaped the 45,000-hectare blaze in their backyard.

During her visit to Coonabarabran on Thursday, Ms Gillard paid tribute to the bravery and stoicism of residents of the Warrumbungles, who were hit by NSW’s most destructive fire in more than a decade.

Ms Gillard heard how two friends, neighbours and fellow RFS volunteers Bob Fenwick and Dave Keirle were called into the park to help tackle the blaze.

But by the time they got back to their own homes they couldn’t do anything.

“It was just all over. It was so fast,” said Mr Fenwick, who has fought up to 40 fires.

His home was one of the 51 destroyed in the firestorm, which did not claim any lives.

At the Siding Spring Observatory Peter Verwayen, who lives at and looks after the site after hours, said he saw the fire come up the hill at around 4pm on Sunday just before receiving an RFS warning.

Minutes later, flames were lapping the side of the hill.

“We got off the mountain .. I think with about five to 10 minutes to spare,” he told the prime minister.

It then took more than an hour before the RFS had confirmation that everyone was safe.

“We were very anxious for a while,” RFS Commissioner Shane Fitzsimmons said.

“We actually thought they were still here.”

Ms Gillard said she was overwhelmed by the stories of bravery.

Even Mr Fenwick, who fought his first bushfire at the age of 14, was obviously surprised by its ferocity, she said.

“He’s a man who knows a fair bit about fire and (he) said when it took his home there was just no stopping it, that it was burning grass that had water running over it, such was the intensity of the fire,” the prime minister said.

Mr Fitzsimmons said that across NSW, firefighters were seeking to strengthen “incomplete and tenuous” containment lines ahead of deteriorating conditions on Friday.

At Coonabarabran temperatures are expected to return to the high 30s, with northwesterly winds forecast to reach up to 30km/h.

Severe conditions are predicted for southern NSW, where temperatures are set to push the mid-40s and wind of gusts up to 80km/h will see the focus on fires burning at Wandandian near Nowra and in Cooma.

“We do have uncontained fire edges and with that weather coming through we have concerns for breaches of the containment lines,” an RFS spokesman told AAP.

With 84 fires burning across the state, 14 of which are uncontained, the RFS has issued total fire bans for all but five districts.

Meanwhile, a bushfire appeal by the Warrumbungle Shire Council has raised $59,000 for affected residents.

The federal government has also announced disaster recovery payments of $1000 for adults and $400 for children will apply to people in the Coonamble, Gilgandra and Warrumbungle local government areas.

British Foreign Secretary William Hague, who was visiting Sydney, said the UK had been “saddened” to watch the devastating bushfires.

“I bring a message of sympathy and solidarity from Prime Minister David Cameron to everyone who has been affected,” Mr Hague said during a lecture at the Menzies Research Centre on Thursday. – AAP