Prime Minister Julia Gillard has dived back into the political fray for the first time since the Alan Jones controversy broke by slamming Tony Abbott for his "nonsense" claim the mining boom has ended. 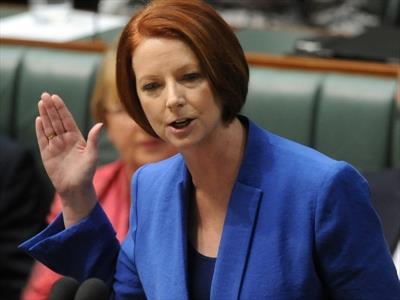 Prime Minister Julia Gillard has dived back into the political fray for the first time since the Alan Jones controversy broke by slamming Tony Abbott for his “nonsense” claim the mining boom has ended.

Ms Gillard said on Wednesday she didn’t intend to comment on the continuing furore surrounding the broadcaster, who sparked outrage by saying her father John had “died of shame” over his daughter’s political “lies”.

But she did confirm she would boycott Jones’ top rating breakfast show on Sydney radio station 2GB.

“I haven’t spoken to Mr Jones and I don’t intend to,” she told reporters in Launceston.

While the prime minister deflected questions about Mr Jones, she was more than happy to respond to the opposition leader’s latest comments on the economy.

“The mining boom has ended prematurely – so it seems – because of bad policy from this government.”

“That is clearly a nonsense remark and it is wrong and inappropriate for anybody to be talking the Australian economy down,” she said.

“We’ve got a resources boom where we are yet to see the investment peak and the production peak,” Ms Gillard said.

“They lie in front of us and the Reserve Bank was crystal clear about that yesterday.”

The Reserve Bank on Tuesday unexpectedly cut the official cash rate by 25 basis points to 3.25 per cent, leaving mortgage holders waiting to see if the big four banks will pass on the reduction in full or in part.

So far only the Bank of Queensland has reacted to the decision by passing on a reduction of 20 basis points for variable-loan customers.

“I certainly believe that banks should be passing on the interest rate reduction from yesterday,” she said.

“I want to see Australian families get the benefits.”

Mr Abbott said the government must ensure the cut is passed on in full.

“The Reserve Bank’s position is that our economy is soft,” Mr Abbott said.

“The Reserve Bank cut official interest rates yesterday because it wants that cut passed on. We want that cut passed, and if Treasurer Swan had any credibility he would ensure that that happens.”