Prime Minister Julia Gillard has confirmed the future of offshore processing of asylum seekers is in doubt after the High Court's decision to scuttle the Malaysian people swap deal. 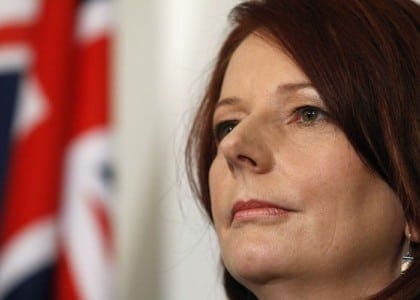 BUT the opposition insists the court’s ruling applies only to the Malaysia deal and the government could still reopen the Howard government-era detention centre on the tiny Pacific island of Nauru.

Julia Gillard and Immigration Minister Chris Bowen have so far refused to rule out resurrecting Nauru. But the Labor left has signalled that it would baulk at any such move.

Cabinet convened for an emergency meeting in Brisbane on Wednesday night to consider urgent preliminary advice from the solicitor-general on the ruling’s implications.

“There are questions over the future of offshore processing arrangements that must be considered,” Ms Gillard told reporters in Brisbane.

In her first substantive comments on the ruling, Ms Gillard said it was “disappointing” and represented a “missed opportunity” to tackle people smuggling.

The prime minister made plain her displeasure with the court, singling out Chief Justice Robert French for mention.

“(He) considered comparable legal questions when he was a judge of the Federal Court and made different decisions to the one that the High Court made yesterday,” she said.

Mr Bowen said the ruling was likely to have a significant impact on any government’s future attempts to send unaccompanied minors offshore.

Doing so would require the immigration minister to issue written permission for an unaccompanied minor to be removed from Australia. But each such edict would be judicially reviewable, making removal “highly problematic”, Mr Bowen said.

“The only guarantee that I ever give is every decision we take will be taken in the national interest,” she said.

Labor backbenchers are concerned the government will lose support to the Greens – and ignore its human rights obligations – if it takes a harder line.

“That was a naive, simplistic approach, and I don’t support that,” Senator Cameron told ABC Radio.

“We need to ensure that there’s a humanitarian approach to refugees, and that’s a big challenge for the government.”

Despite the uncertainty surrounding the future of offshore processing, Opposition Leader Tony Abbott maintained there was nothing in the court’s judgment that would prevent Nauru being reopened.

Government claims to the contrary were “a political excuse” for not embracing Nauru, Senator Brandis said.

He accused Ms Gillard of misrepresenting the solicitor general’s advice and called her attack on the court “hugely inappropriate”.

Under the deal first announced by Ms Gillard on May 7, the government had planned to send 800 asylum seekers to Malaysia in exchange for 4000 already-processed refugees.

But the court’s full bench agreed 6-1 that Mr Bowen’s declaration that Malaysia was an appropriate place to send asylum seekers was invalid.

The court decreed a country must be bound by the UN Refugee Convention or its own domestic laws to protect asylum seekers to qualify as an appropriate destination.